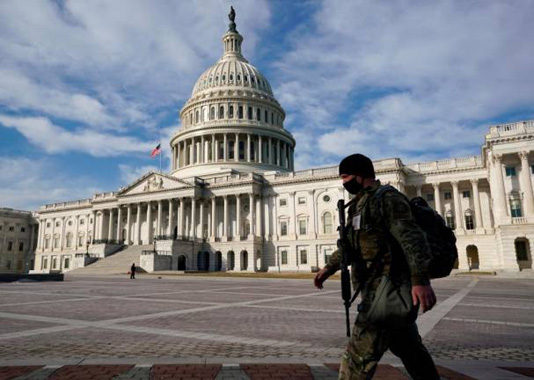 Washington’s security posture hasbeen bolstered after threats of a possible Thursday “breach” of the USCapitol, with the House of Representatives changing its voting plans to avoid gathering members on a day of potential unrest.

The warning was relayed Wednesday by US Capitol Police, who said it was prompted by intelligence about an unnamed militia group, reports AFP.

It follows online chatter from conspiracy-embracing extremists who believe March 4 is the day former president Donald Trump will return to Washington to be inaugurated for a second term.

The threat comes nearly two months after Trump supporters, including QAnon followers, stormed the Capitol building and laid siege to Congress, in an attack that left five people dead and shook the citadel of American democracy.

Some followers of the QAnon conspiracy theory believe Trump was cheated out of a second term and that Thursday will mark his victorious return to power to confront a secret global cabal of satanist liberals.

“We have obtained intelligence that shows a possible plot to breach the Capitol by an identified militia group on Thursday, March 4,” the US Capitol Police said in a statement.

“We have already made significant security upgrades to include establishing a physical structure and increasing manpower to ensure the
protection of Congress, the public and our police officers,” the police force said, adding it is “taking the intelligence seriously.”

House officials told lawmakers that voting will no longer occur on Thursday, saying votes on two key bills on police reform and voting rights would now occur late Wednesday. They are the final votes of the week.

In the Senate, the sergeant at arms emailed senators and staff outlining enhanced security measures, including additional personnel, in place at the Capitol.

The Senate plans to gavel in at noon (1700 GMT) Thursday to begin consideration of a massive $1.9 trillion Covid relief package supported by President Joe Biden.

Police have pointed to online discussions suggesting some in the QAnon movement see Thursday as a Trump inauguration day. Most US presidents were inaugurated on March 4 until 1933, when the date was changed to January 20.

What remained unclear is whether the threat remains mere online talk by extremists, or will be converted into action with groups heading to Washington to stir up trouble.