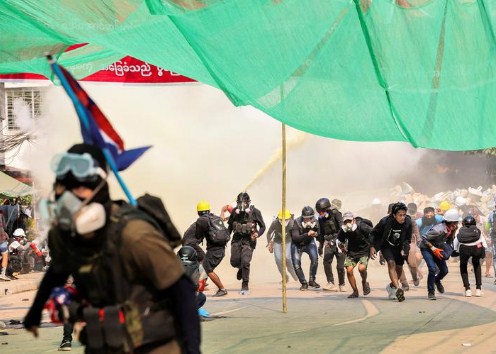 The U.S. House of Representatives on Friday overwhelmingly approved legislation condemning the military coup in Myanmar, as lawmakers decried increasingly harsh tactics used to suppress demonstrations since the Feb. 1 ouster of the elected government of Aung San Suu Kyi.
The measure passed by 398 to 14, with one voting “present.” All of the “no” and “present” votes came from Republicans.
The resolution condemned the coup and the detention of Myanmar’s civilian leaders, called for the release of all those detained and for those elected to serve in parliament to resume their duties.
The House on Thursday had passed another Burma-related measure by voice vote – without a roll call. That bill, which must be passed by the Senate before becoming law, would require President Joe Biden’s administration to provide a report to Congress on events in Myanmar and its response to them.
166
Share