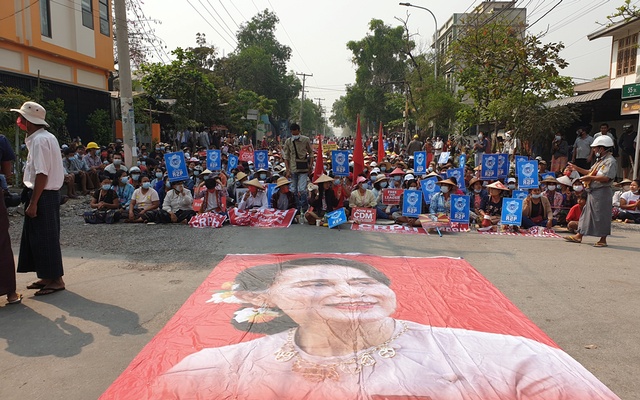 The UN Security Council on Wednesday condemned violence against Myanmar protesters and called on the army to show restraint, but failed to denounce the military takeover as a coup or threaten further action due to opposition from China and Russia.

More than 60 protesters have been killed and some 2,000 people have been detained by security forces since the Feb 1 coup against elected leader Aung San Suu Kyi, the Assistance Association for Political Prisoners advocacy group said, reports Reuters.

On Wednesday, security forces firing teargas and rubber bullets trapped hundreds of anti-junta protesters late into the night in two districts of Yangon.

Some protesters who managed to evade blockades set up by police in surrounding streets told of scores of arrests and said that some of those who got caught were beaten.

In a bid to increase pressure on the military as it continues its crackdown, the US Treasury Department on Wednesday imposed sanctions on two children of military leader Min Aung Hlaing and six companies they control.

“The indiscriminate violence by Burma’s security forces against peaceful protesters is unacceptable,” said Director of the Office of Foreign Assets Control, Andrea Gacki.

Campaign group Justice for Myanmar said in January that Min Aung Hlaing, who has been commander in chief since 2011, had “abused his power to benefit his family, who have profited from their access to state resources and the military’s total impunity.”

In New York, the United Nations Security Council said in a statement that it “strongly condemns the violence against peaceful protesters, including against women, youth and children.

“The council calls for the military to exercise utmost restraint and emphasises that it is following the situation closely.”

But language that would have condemned the coup and threatened possible further action was removed from the British-drafted text, due to opposition by China, Russia, India and Vietnam.