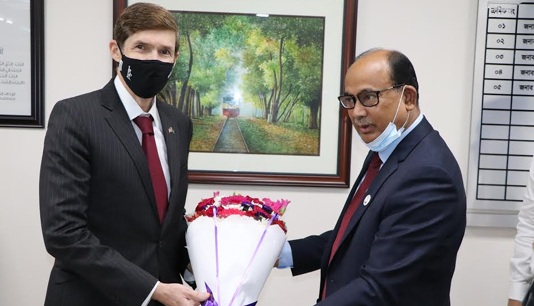 The minister made the call when US Ambassador to Bangladesh Earl R Miller called on him at the Rail Bhaban in Dhaka.

During the meeting, they also discussed how the US government can assist the Bangladesh Railway.

The minister informed the US envoy about the import of 40 US made broad-gauge locomotives for Bangladesh Railways.

Under the consignment, the US will supply the locomotive engines in five lots containing eight engines in each, one of which already has reached the country.

The minister also urged the US envoy to look into the matter that how the US modern technology can be used in Bangladesh’s railway.

He also urged the US to come forward for building passenger coach and locomotive factories in Bangladesh.

Economic Officer of US embassy in Bangladesh Jeffrey De Corse, Railways Secretary M Selim Reza, Director General of Bangladesh Railway Direndra Nath Majumder and other high officials, among others, were present during the meeting.