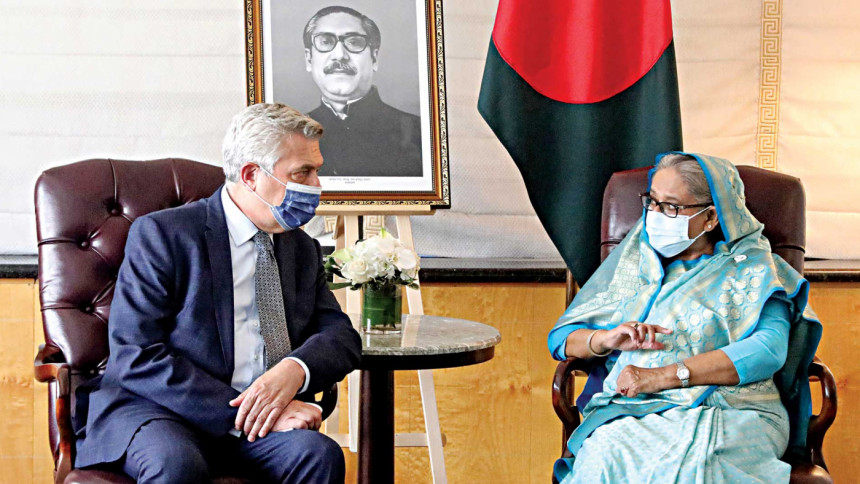 Prime Minister Sheikh Hasina on Tuesday reiterated her call to the international community and the United Nations to play a stronger role in solving the Rohingya crisis by repatriating the Myanmar nationals to their motherland.

She made the call when UN High Commissioner for Refugees Filippo Grandi paid a courtesy call on her at the Lotte New York Palace hotel.

Foreign Minister AK Abdul Momen briefed journalists about the PM’s activities on the sidelines of the 77th session of the United Nations General Assembly (UNGA).

During the meeting, Hasina emphasised enhancing the UNHCR’s activities in Myanmar on Rohingya issues. Grandi in reply said he would visit Myanmar soon.

The premier reiterated that the Rohingya crisis could only be resolved through the repatriation of the forcibly displaced Rohingyas. The UNHCR high commissioner agreed with her on this matter.

The PM and the UN envoy discussed in detail the UNHCR’s present activities to help the Rohingyas sheltered in Cox’s Bazar and Bhasan Char of Bangladesh.

Later in the day, prosecutor of the International Criminal Court (ICC), Karim AA Khan, called on Hasina at the same venue.

They discussed various aspects of cooperation between Bangladesh and the ICC.

The premier assured the ICC prosecutor of Bangladesh’s continued cooperation with its efforts to ensure justice and accountability for the Rohingya victims in Myanmar.

Khan expressed his willingness to visit Bangladesh early next year.

They discussed Bangladesh government’s steps considering the importance of sustainable urbanisation and the areas of future cooperation.