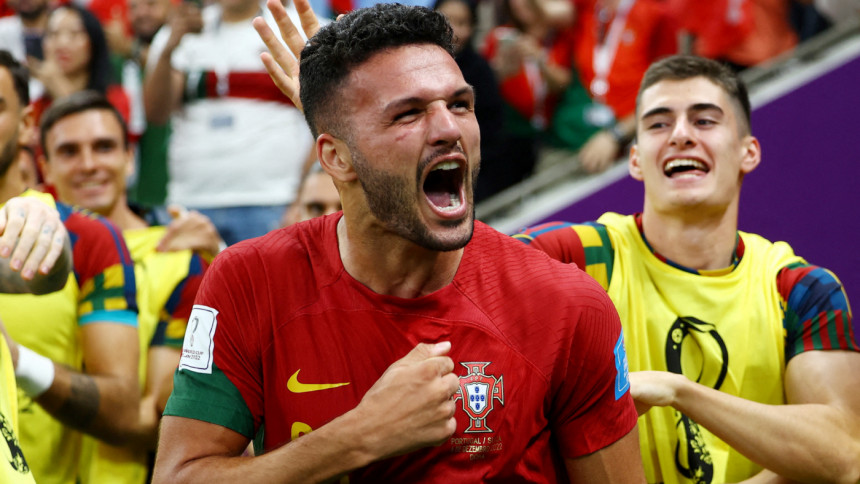 Portugal’s Goncalo Ramos was as surprised as anyone at being named in the starting lineup for Tuesday’s 6-1 hammering of Switzerland in the World Cup last-16 and managing to score a hat-trick was beyond his imagination.

Making his first World Cup start, Ramos smashed three goals past the Swiss and set up another to propel Portugal into the quarter-finals for the first time since 2006.

Ramos, 21, made headlines before kick off when the teams were announced, picked by Fernando Santos to lead the attack in place of Cristiano Ronaldo, who was relegated to the bench.

It did not take long for the youngster to become one of the biggest stories so far at the Qatar World Cup.

“I think not even in my wildest dreams I thought about being in the starting 11 for the knockout phase,” Ramos said, smiling.

Asked if Ronaldo spoke to him before the game, Ramos said the issue of him being benched did not come up among the players.

“Honestly, in our team, no one talked about it. Cristiano as our captain, as he always did, he helped us, he gave encouragement to us, not only to myself, but our team mates.”

Ramos made his debut in Portugal’s 4-0 win over Nigeria in a warm-up game a few days before the World Cup and played a total of 10 minutes as a substitute in two of the three group matches.

The Benfica striker’s treble made him the first player to score a hat-trick in his first World Cup start since Miroslav Klose against Saudi Arabia in 2002.

Ramos scored the opener for Portugal with a stunning strike at the near post after 17 minutes and added a second in the 51st when he put the ball through keeper Yann Sommer’s legs before helping tee up Raphael Guerreiro’s goal four minutes later.

He got his hat-trick after 67 minutes when he latched onto Joao Felix’s pass and lifted the ball deftly over the advancing Sommer, smiling and repeating for a third time his two-guns celebration before going off as a substitute soon after.

Ramos said it was too soon to know if he would get a start in the quarter-finals against Morocco on Saturday.

Asked who his role models were, he said: “Cristiano Ronaldo was one of them,” together with Robert Lewandowski and Zlatan Ibrahimovic. He has clearly been watching them closely.