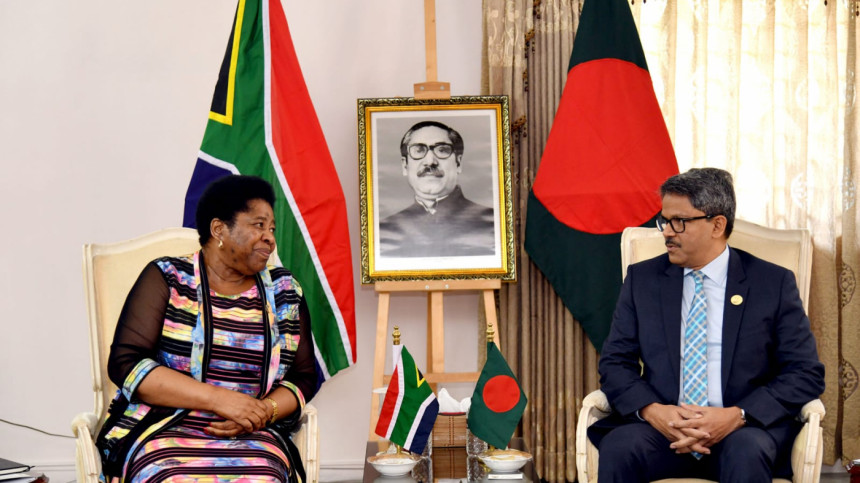 She underscored the need for 2-way visits of business delegations between Bangladesh and South Africa.

Dlamini is on a bilateral visit to Dhaka as well as to join the IORA meeting.

The Bangladesh side comprised the Secretary (East) of the Foreign Ministry and other officials of the ministry.

The state minister suggested that South African entrepreneurs may invest in high tech parks and establish cooperation in agriculture, IT, and climate change areas.

He mentioned the supreme and lifelong struggle of Father of the Nation Bangabandhu Sheikh Mujibur Rahman and President Nelson Mandela for the emancipation of the common people.

The state minister mentioned that Bangladesh and South Africa are cooperating in common platform like impacts of climate change.

He said that Bangladesh is committed to social development agenda like women empowerment and is championing the agenda in international platforms apart from making dedicated efforts in Bangladesh.

Dlamini stated that South Africa is considering establishing a consular office in Dhaka, as State Minister Shahriar Alam urged the South African side to open a South African Consulate in Dhaka.

The state minister thanked the South African Minister for their support extended to Bangladeshi citizens living in South Africa.

He underscored the need for introduction of direct air connectivity and regular official contacts.

‘Dhaka should focus more on Indo-Pacific’