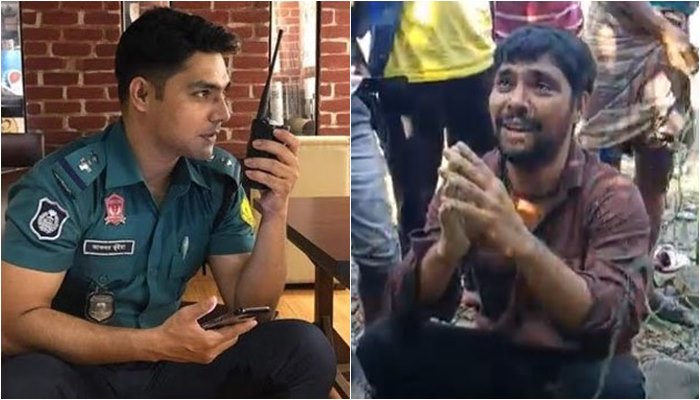 Akbar Hossain, suspended sub-inspector of Bandarbazar Police Station who remained fugitive after Rayhan Ahmed’s death in  custody, has claimed that he went into hiding after a senior officer’s advise.

“A senior official had told me to go into hiding after the incident. I was not involved in the killing. I won’t flee bhai I won’t flee,”  in a video clip Akbar was seen telling locals at a Khasia village in India who captured him on Monday.

The police officer was handed over to Bangladesh police through Dona bordering area in Kanaighat upazila by the Indian people at about 10.30am today.

In the first video it is seen that Kashia people along  with a number of Bangla speaking people tied up Akbar’s hand from the back and interrogating him.

Akbar told the locals, “A senior officer told me to go to hideaway and come back after two months when the situation becomes normal. …I did not kill anyone bhai…I’m not a killer”

A man was seen asking Akbar’s name in the second video.

Akbar, sitting on the ground, was seen pleading to locals and said, “I am Akbar.”

Denying the allegation, the suspended SI said, “No, I didn’t kill him, I took him to hospital.”

A few people were then seen saying, “Do not beat him. He is a Bangladeshi. …He will face trial. They will bring him under justice.”

On October 11, Rayhan Ahmed, 34, a resident of Akhalia in Sylhet city, was beaten to death in police custody at Bandarbazar Police outpost, said the victim’s family.
29
Share