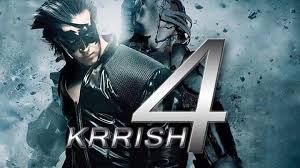 If there is one character, actor Hrithik Roshan is best remembered for, then it has to be that of Indian superhero Krrish. His character in the superhero series is one of the most adored ones and even after three editions, one craves for more. Rumours about Krrish 4 making the theatres in the coming month have been in full swing. Unfortunately enough, no such confirmation has been given by the makers or the actor himself. However, we think we all may be in for a treat, thanks to Hrithik Roshan’s latest post.

The actor recently took to his social media account to share an illustration of his superhero avatar. In the background, you can hear the piano version of the title track, giving all the more reasons to believe that the fourth installment of the series is soon to arrive. Hrithik’s caption read: “The human must rise. The reason is the experience itself . K.R.R.I.S.H”.

As a Krrish fan, we are sure you are going to go gaga over his post so without further adieu, check it out here:

This cryptic post has sure left Hrithik’s fans wondering whether he is making an official announcement about the film. Taking to the comment section, some have spurred him to confirm Krrish 4 while others are totally convinced that the movie will soon hit the floors.