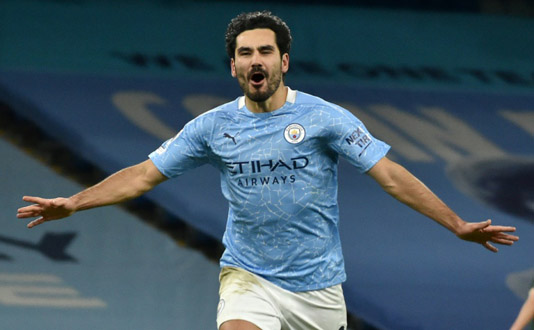 Ilkay Gundogan’s free-scoring form has played a major role in Manchester City surging 10 points clear at the top of the Premier League as they close in on a third title in four seasons.

However, City’s latest quest for the trophy they most desire restarts this week with the first leg of their Champions League last 16 tie against Borussia Moenchengladbach, reports AFP.

As Pep Guardiola’s first signing after arriving in Manchester, Gundogan joined a project determined to make a mark on Europe’s premier club competition.

Despite six major trophies in the past five years and the likelihood of more to come this season with City also going strong in both domestic cup competitions, the Champions League has been a constant source of frustration for Guardiola.

Under the Catalan, City have not progressed beyond the quarter-finals in four attempts.

On the back of an 18-game winning run in all competitions, not for the first time the Premier League leaders find themselves tagged as Champions League favourites.

If this is to be the year that the Sheikh Mansour’s billions of dollars worth of investment pays off in Champions League glory, Gundogan is likely to be a central figure.

The German is already having his best ever goalscoring season with 13 in all competitions, 11 of which have come in his last 13 Premier League games.

Gundogan’s game is about much more than goals. A metronomic midfielder who rarely gives the ball away, he fits the profile as the type of player Guardiola loves.

“He is such an intelligent player,” said the former Barcelona and Bayern Munich boss. “That’s one of the qualities I appreciate the most, intelligence — the players who understand everything that happens during the game and solve it as quick as possible.”