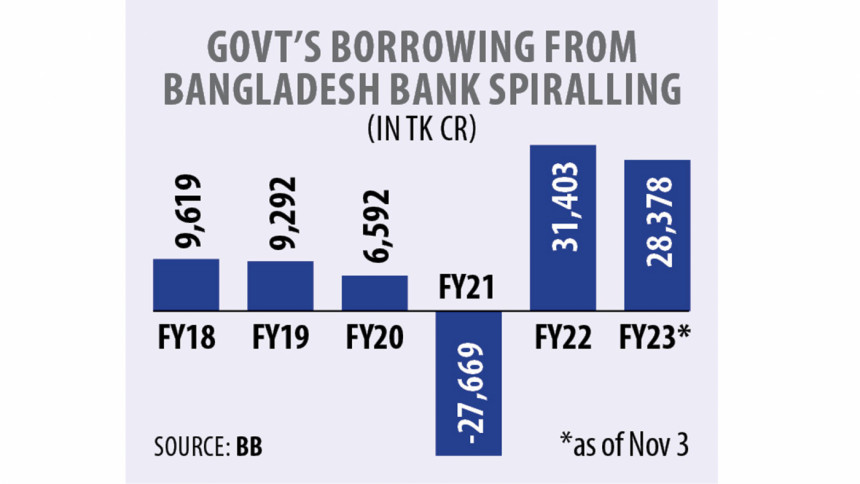 Playing with fire is what the government is doing to meet its deficit financing.

In a time of elevated inflation, the government has started to borrow heavily from the Bangladesh Bank to meet the budget deficit, in a move that is set to push up the consumer price level further.

Between July 1 and November 3 this year, the government borrowed Tk 28,378 crore from the central bank, data from the BB showed. In all of the last fiscal year, it borrowed Tk 31,403 crore from BB.

“Borrowing from the central bank means printed money is being injected into the market — this will fuel inflation,” said Ahsan H Mansur, executive director of the Policy Research Institute of Bangladesh.

In other words, the volume of notes and coins out in circulation is increasing. And such a form of money can multiply as much as five times in Bangladesh through fractional reserve banking, a system in which only a fraction of bank deposits are backed by actual cash on hand and available for withdrawal.

The extra money in a certain section of people’s hands means it will create demand for goods, which, in turn, will push up the price level.

In October, non-food inflation, which accounts for 40 percent of overall inflation, maintained its rising trend and hit a new high of 9.58 percent.

Inflation averaged 8.75 percent in the first four months of the fiscal year — a long way off the target of 5.6 percent set in fiscal 2022-23’s budget. This has already sparked off a cost of living crisis in the country, hitting the poor and the middle-class hard.

If the government maintains its current trend of borrowing from the central bank, non-food inflation and, in turn, inflation will spiral in the coming months.

There is no other option for the government but to take a loan from the central bank as commercial banks are now facing liquidity stress owing to the volatility in the foreign exchange market stemming from an acute dollar shortage, said Mansur, also the chairman of Brac Bank.

“It is an alarming phenomenon for the economy that the government is now repaying its maturing loans from commercial banks by taking funds from the central bank,” said a BB official on the condition of anonymity to speak candidly on the matter.

Of the sum taken by the government from the BB, Tk 4,627 crore was used to repay commercial banks, so the government’s net borrowing from the banking system during the period is Tk 23,751 crore.

“The government has never taken loans at a faster pace in recent years from the central bank,” he added.

Governments around the world avoid borrowing excessively from the central bank as much as possible as it creates inflationary pressure, said Monzur Hossain, research director at the Bangladesh Institute of Development Studies.

“The ongoing excessive borrowing from the BB is not logical as ordinary people have already been hit hard by high inflation,” he said, while urging the government to explore borrowing from alternative sources like national savings instruments.

Net investment in savings tools nosedived to Tk 330 crore in the first three months of the fiscal year from Tk 8,558 crore a year earlier.

If required, the government should relax the rules and regulations for parking funds in savings certificates, Hossain added.

Mansur, who is also a former economist of the International Monetary Fund, advised the government to either amp up its revenue collection or pare down its expenditure to avoid turning to the central bank.

The National Board of Revenue’s first quarter receipts of Tk 67,124 crore missed the periodic target by 5.8 percent.

In September, revenue collection growth was 8 percent, in contrast to 20 percent a year earlier.

“It is now difficult for the majority of banks to finance the government as they are now in liquidity stress due to lower deposit growth,” said Emranul Huq, managing director of Dhaka Bank.

Besides, a good number of banks are buying dollars from the central bank in exchange for the taka to clear their import bills amid the shortage of the greenback.

This fiscal year, BB has injected more than $5 billion into the market after fiscal 2021-22’s record injection of $7.62 billion.