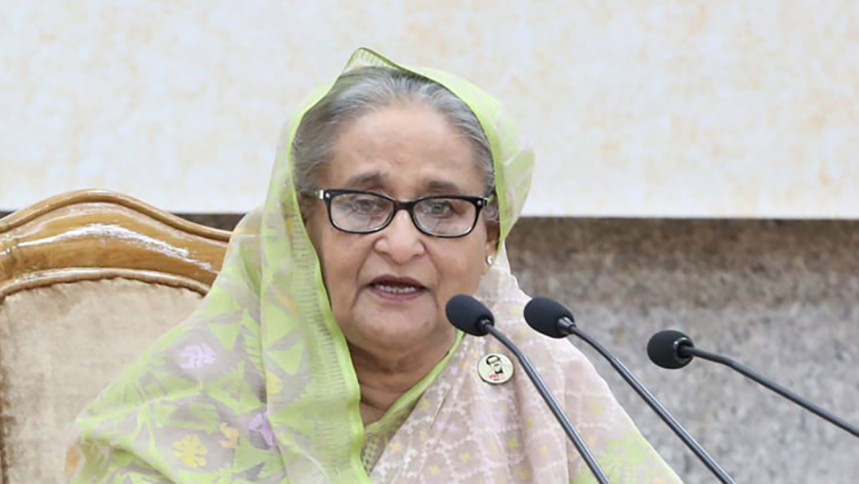 Prime Minister Sheikh Hasina today called upon the countrymen to work together to take the country further ahead keeping dignity intact.

The premier also gave credit to all people including businessmen for elevating Bangladesh to a dignified position.

“We have taken Bangladesh to a dignified position. We have to take the country further ahead while maintaining dignity,” she said while receiving blankets and winter clothes from various financial institutions for the PM’s Relief and Welfare Fund at the Prime Minister’s Office in the capital.

The prime minister said Bangladesh witnessed a massive development over the last 14 years which has been visible as her party Awami League is in power for three consecutive terms since 2009.

In this connection, she referred to talks with Malaysian leader Mahathir Mohammad in an international programme where Mahathir said that a long-term government is required for ensuring the country’s development.

“We have been able to develop Bangladesh as we are in power for a long time,” she said.

“You [businessmen] and the people have contributed to whatever Bangladesh has achieved,” the PM added.

Hasina said her government has been working for the balanced development of the country and every section of people, including the disadvantaged communities in society.

The premier said they have rehabilitated different disadvantaged communities, including people with special needs, transgender, Bede (gypsy) and leprosy patients by providing them with homes free of cost as part of the government’s move to bring every landless and homeless people under its housing scheme.

“We are upgrading the living standard of everyone …,” she said.

Representatives from different financial institutions including banks were present.