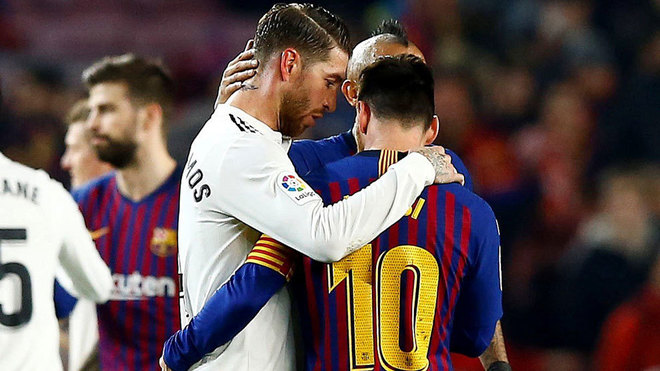 Real Madrid beat Barcelona in an entertaining El Clasico behind closed doors.
Federico Valverde smashed Real, who had lost their previous two games, into the lead from Karim Benzema’s pass.
Barcelona’s Ansu Fati, 17, levelled from Jordi Alba’s cross, becoming the youngest goalscorer in El Clasico history.
Sergio Ramos scored from the spot after he was fouled by Clement Lenglet and Luka Modric smashed in a late third.
The result takes Real top of the fledgling La Liga table with 13 points from six games, six points above Barcelona.
Efficient Real brush off recent defeats
Real Madrid boss Zinedine Zidane has not lost any of his six matches as a manager at the Nou Camp, with three wins and three draws.
Morale may have been low after defeats in their previous two games by Cadiz, in La Liga, and Shakhtar Donetsk, in the Champions League.
But they started brightly when Benzema fed Valverde, who slammed the ball into the far corner, leaving Neto with no chance.
Fati’s almost immediate equaliser made it the first time both sides scored in the opening eight minutes of a Clasico in La Liga since 1940.
After that, Barca threatened to take control but Real did well to turn the tide.
The turning point was a lengthy video assistant referee decision. Referee Juan Martínez Munuera did not spot Lenglet’s pull on Ramos’ shirt but eventually gave a penalty after viewing it on the screen.
158
Share

US opposed to ICC probe of Israel

Supporters of 2 mayor candidates clash in front of Law…

Politics of murder is clear through a BNP leader’s speech:…