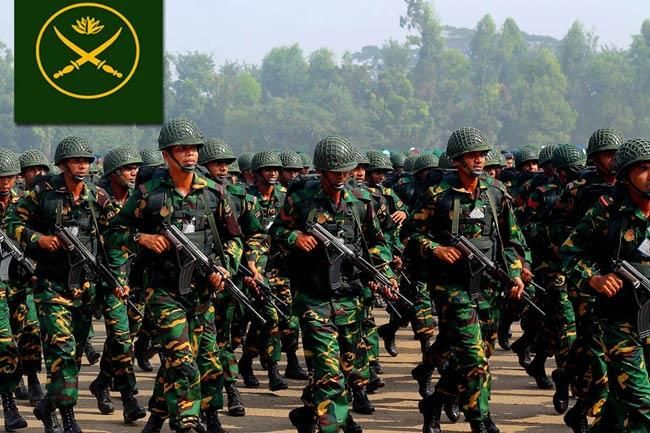 The Armed Forces Day will be celebrated through various programs on Saturday amid festivity and enthusiasm, marking the establishment of the forces during the 1971 Liberation War, reports BSS.

The day’s program will begin with offering of special prayers after Fazr prayers at all mosques in all the cantonments and naval and air force bases throughout the country on the day, seeking divine blessings for the well-being and prosperity of the nation and progress of the armed forces, said an ISPR press release.

President M Abdul Hamid and Prime Minister Sheikh Hasina issued separate messages, greeting members of the armed forces on the occasion of the Armed Forces Day to be observed in the country on Saturday.

In his message, the president said the armed forces are the symbol of confidence and pride of the nation.

He said the members of the armed forces are playing a pivotal role in various national activities, including facing national disasters in aid of the civil administration, along with safeguarding the independence and sovereignty of the country.

Even members of the armed forces also have brightened the image of the country before the world through participating in the peacekeeping missions of the United Nations and performing their responsibility with utmost sincerity, discipline and professional expertise, said President Hamid, also the supreme commander of the armed forces.

During the ongoing coronavirus pandemic, the president said, members of the armed forces have played laudable roles in preventing the viral infection by engaging themselves in the field.

Recalling the glorious founding day of the armed forces, Prime Minister Sheikh Hasina said in her message that members of the army, navy and air force had retaliated against the occupation forces on November 21 in 1971.

The freedom fighters, members of different paramilitary forces and the patriotic people had carried out jointly an integrated attack and compelled the occupation forces to surrender, the prime minister said in her message.

“We achieved the final victory on December 16 in 1971 after defeating the occupational forces. And the ‘Armed Forces Day’ is being observed in every year on November 21 as a landmark of the victory and success of the Bangalee nation in the great liberation war,” she said.

The government has formulated “Forces Goal-2030” in light of the defence policy of 1974, she said, adding that the modernization of the three forces is being implemented gradually under the policy.

Besides, the prime minister’s speech, marking the Armed Forces Day-2020, will be aired simultaneously through Bangladesh Television and other private televisions and radios at 7.30pm on Friday.

Programs to celebrate the day

As part of the day’s program, military secretary to the president, on behalf of him, and military secretary to the prime minister, on behalf of her, will place wreaths at the Shikha Anirban (the Eternal Flame) at Dhaka Cantonment on Saturday morning, paying homage to the martyred armed forces’ members who laid down their lives in the Liberation War in 1971.

On the occasion, chiefs of the three services will call on the president at the Bangabhaban and the prime minster at Ganabhaban on the day.

The prime minister’s Security Affairs Adviser Major General (Retd) Tarique Ahmed Siddique and Principal Staff Officer of the Armed Forces Division will be present at the meeting with the premier.

The authorities, however, decided to celebrate the day this year in a limited scale due to the global pandemic coronavirus. Therefore, Bangladesh Navy Ships (BNS) in Dhaka, Khulna, Chandpur, Barishal and Chittagong will not be open for the general people this year.

The state-run Bangladesh Television (BTV) will air the “Special Anirban” program illustrating the significance of the day after the Bangla news of 8pm on Friday while the Bangladesh Betar would broadcast the “Special Darbar” program at 7:30pm on Saturday.

Later, the “Special Anirban” program would be telecast by other private television channels while national dailies will publish special supplements highlighting significance of the day.