‘And then they were 3!’ Anushka Sharma and Virat Kohli shared their good news with the world back in August and since then fans have been super excited to see the power couple step into the shoes of parents. While Anushka is an ace actress and producer in Bollywood, Virat makes the nation proud every day with his impeccable captainship skills as he plays for the Indian Cricket team. The couple recently welcomed their baby girl on January 11 and since then fans are eagerly waiting to see a glimpse of their baby girl.

While we eagerly wait to see their child’s glimpse, Virat is giving out major goals for everyone. If you check his Twitter account, the cricketer has changed his bio and it has an Anushka Sharma connection! His bio has caught the attention of his millions of followers.  It now reads as “A proud husband and father”. How cute is that? 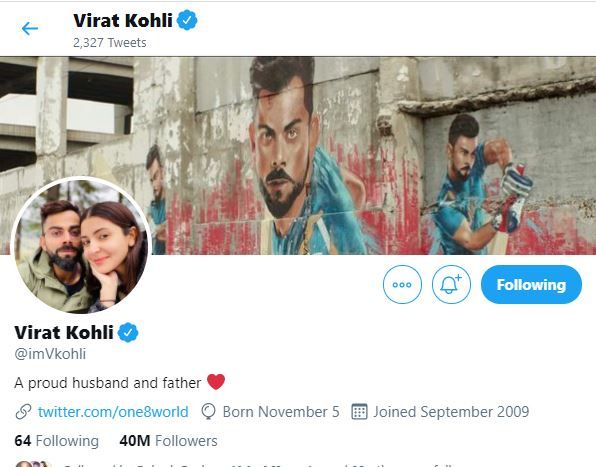 Anushka Sharma tied the knot with Virat Kohli back in 2017 and since then have spilled out major couple goals for everyone. Be it supporting each other’s careers or speaking up for their other half, the duo has done it all.