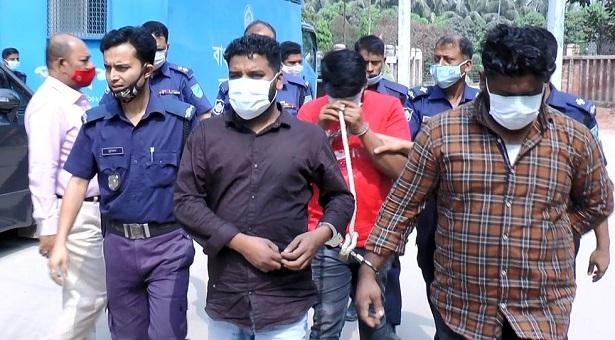 Three including police official on remand in arms, drug cases

A police official and his two associates who were arrested with phensidyl and firearms from Sonargaon upazila in Narayanganj district have been placed on a four-day remand.
Sub-Inspector Kaikobad Pathan of Kalapaharia Police Camp under Araihazar upazila in Narayanganj district and two associate drug peddlers were placed on two days of remand in each of the two cases against them after they were produced before Senior Judicial Magistrate Milton Hossain’s court on early Tuesday afternoon.

Earlier, a team of RAB-3 Battalion on Monday afternoon arrested SI Kaikobad and two drug peddlers with two foreign pistols along with 25 rounds of bullet, and 240 bottles of phensidyl from Meghna Toll Plaza under the upazila on the Dhaka-Chattogram highway. Later, RAB-3 filed two seperate cases against them under the firearms and drug dealing cases with Sonargaon Police Station. Sonargaon police on Tuesday morning sent SI Kaikobad and his two accomplices to court.

RAB-3 Battalion’s assistant police super and operations officer Farzana Huque told journalists that they took position at Meghna Toll Plaza on the Dhaka-Chattogram highway receiving information that a drug dealer was coming to Dhaka with a consignment of drugs from Chattogram. At that time, a suspected white private car which was crossing the toll plaza was intercepted and searched. Kalapaharia police outpost’s SI Kaikobad and his associate Robin Hossain were on the rear seat of the car, while one Sohel Mia was driving the car.

Then the RAB-3 team members carried out a search inside the private car and found 240 bottles of phensidyl. They also seized two foreign made pistols with 25 rounds of bullets from SI Kaikobad.

Kangana Ranaut birthday: 10 of the most shocking tweets made by the actress