Days ago, when it was announced that Master is all set to hit the big screen, fans left no stone unturned in promoting the film on social media. From Twitter to Instagram and Facebook, every social media platform was full of back-to-back posts related to the film that stars Vijay Sethupathi, Thalapathy Vijay and Malavika Mohanan in lead roles. Now that the day has arrived for its theatrical release, even celebrities are losing their calm and expressing their excitement for the film’s release.

Keerthy Suresh, one of South cinema’s most-loved leading ladies, returned to the theatre after a year to watch the magic of Master on the silver screen. Not just this, Keerthy booked first-day first show tickets for Master! Sharing a photograph from the theatre, Keerthy opened up about the wonderful feeling of being back at a theatre. 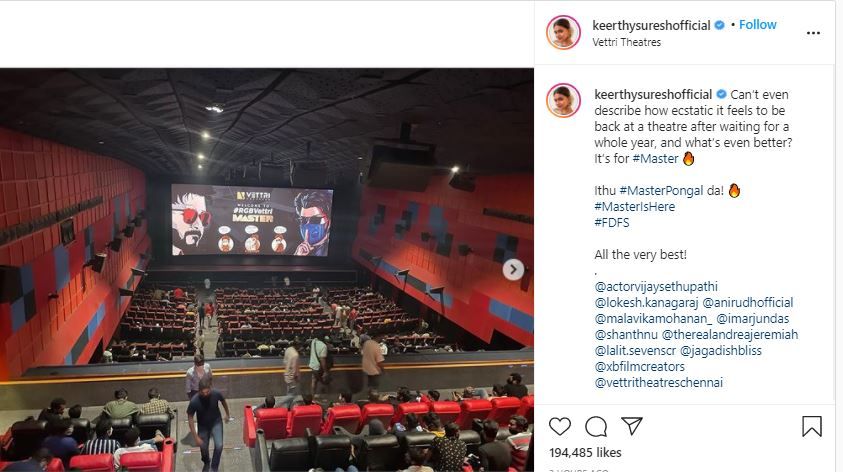 Earlier, in interaction with Zoom Digital, Master actress Malavika had talked in length about what the film has to offer. Revealing that Master has something for everyone, Malavika said that it has action scenes, groovy songs, and a lot of powerful moments.

The anticipation of the film has been such that two days before its scheduled release, a part of the film was leaked on social media. Filmmaker Lokesh had urged fans to not share the leaked film.