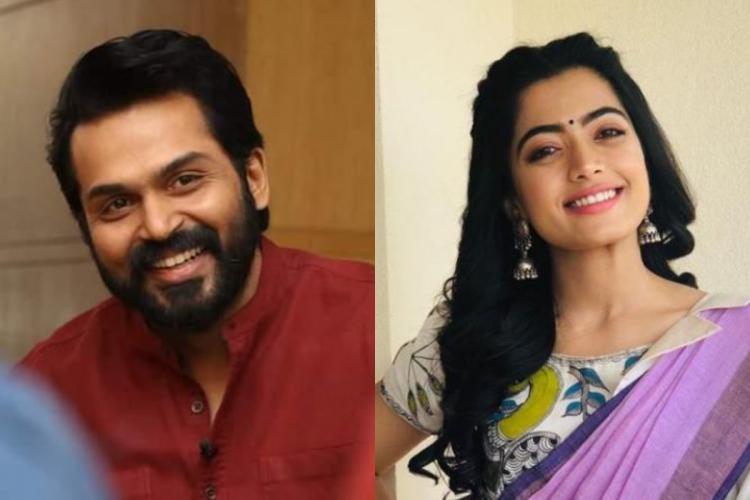 It is all known that Tollywood’s young actress Rashmika Mandanna is all set to make her debut in Kollywood with Karthi starrer Sulthan movie. Being a complete action thriller, Karthi will essay the titular role and will be seen as the younger brother of 100 goons. Off late, the makers of Sulthan movie have dropped the trailer of this movie and created noise on social media.

The trailer was launched at a grand event that was held in Chennai. The trailer looks intriguing, interesting and fascinating too with all its commercial elements. It is not a new thing to witness Karthi as an action hero but this time, he will be seen as the head of 100 goons.

The trailer starts off with an intense mud-fight sequence. Then the plot shifts to the village people who don’t want Sulthan’s army to enter their village. Then Karthi is introduced with an intense look being the younger brother to the army of 100 goons. Then a few love sequences between naughty Rashmika and Karthi take up the track. Rashmika looked cute in her village girl avatar and will be seen rejecting Karthi’s love proposal repeatedly. In the end, a couple of fight sequences and the introduction of antagonists wrap up the trailer.

Just a couple of minutes prior to the trailer release, Rashmika also dropped a heartfelt note doling about her debut movie.

This tweet reads, “#Sulthan A film which is super special to me as it marks my debut in Kollywood ❤️ Signed mainly keeping my Tamil boys, girls & army in mind but after working on this film I realised how everyone will enjoy watching us in these characters… Excited & nervous but truly grateful.”

Even Karthi also shared the trailer on his Twitter handle and dedicated the Sulthan trailer to all his fans. 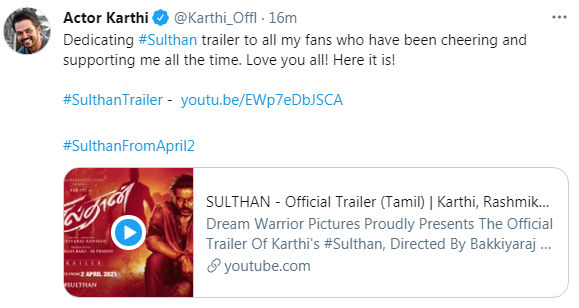 It is also known that there was a gala trailer pre-release event of Sulthan movie held in Chennai a few hours ago. Rashmika and Karthi made their presence and were cheered by their fans.

Rashmika spoke on this special occasion and shared her experience working with Karthi, “Besides him being a co-star, I also found a friend in Karthi. Thank you sir, I should thank you only for your existence, that’s all. The world needs more people like him and Baaki sir. I’m so happy that I worked with him and the whole team.” The much-anticipated trailer will be out today at 5 PM.”

Being a Bakkiyaraj Kannan directorial, Sulthan movie is produced by S. R. Prakash Babu and S. R. Prabhu under the Dream Warrior Pictures banner. This film has Napoleon, Lal, Yogi Babu, Hareesh Peradi, Ramachandra Raju and Nawab Shah in prominent roles. This action thriller will be released on April 2, 2021.