Storms cause flash flooding across Birmingham-UK

Storms caused flash flooding across parts of Birmingham as more than a month’s rainfall deluged parts of the city in just one hour on Sunday.

Parts of Northamptonshire were also flooded and the Environment Agency has issued multiple flood warnings.

Met Office amber weather warnings of rain and thunderstorms are in place this afternoon for East Anglia, London and the South East and the South West.

The South East could also experience the hottest day of the year so far.

He said: “It all depends how much cloud develops. There’s a chance we could see the warmest day of the year.”

West Midlands Police said some roads in Birmingham were still affected by flooding and advised drivers not to ignore road closure signs.

One major route in the city was left impassable because of water up to 5ft deep.

The Far Cotton area of Northampton was severely flooded along with major roads in the county including the M1 and A45.

The Met Office said a site at Winterbourne, in Edgbaston, recorded 58mm of rainfall in just one hour on Sunday afternoon, and 81mm in a 12-hour period.

The monthly average for the West Midlands region in May is 55mm, Mr Snell said.

But he said the torrential rain had been “very localised”, pointing out that another site 10 miles away at Coleshill recorded just 3mm of rain in 12 hours.

BBC journalist Rebecca Woods said she had driven past a large number of flooded and closed roads in the Harborne and Selly Oak areas.

She said she had seen flooded houses and it had taken her 90 minutes to drive about five miles. 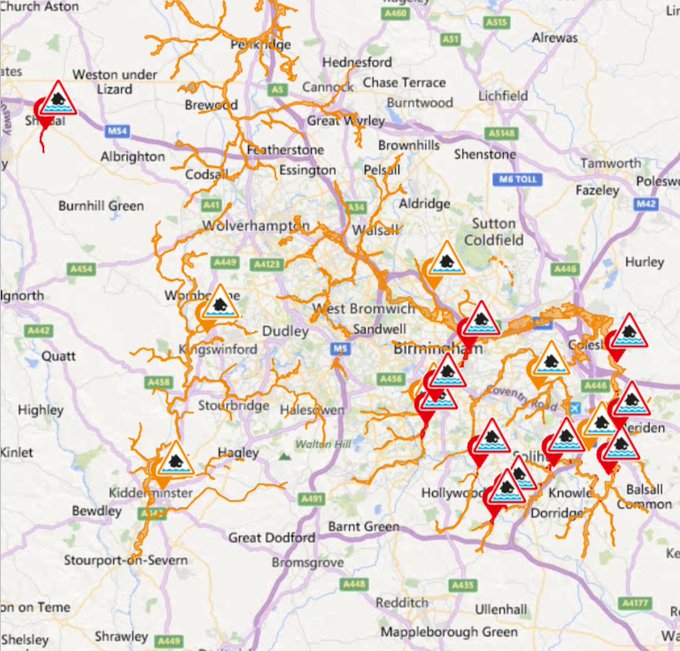 In Sir John’s Road, Selly Park, homes flooded and cars were under water, while wheelie bins floated down the road.

Mr Nunn said: “We want to know exactly what happened and work out ways to prevent it happening again.”

Part of the M1 and A45 in the county were under three feet of water and drivers were trying to pass through the floods.

The A5 remains closed in both directions in the border area of Leicestershire, Warwickshire and Northamptonshire, between the junctions of the A426 at Churchover and the A428 near the Dirft rail terminal to the east of Rugby.

There are high levels of floodwater and Highways England is working to re-open the road as soon as possible.

Warwickshire Fire and Rescue Service (WFRS) said it had also been “extremely busy” dealing with flooding calls on Sunday evening.

The Environment Agency has more than 20 flood warnings and more than 40 flood alerts in place covering much of Central England.

Vijay’s Master tops the list of most popular Indian films, web shows of 2021

Putin: Biden will be less impulsive than Trump