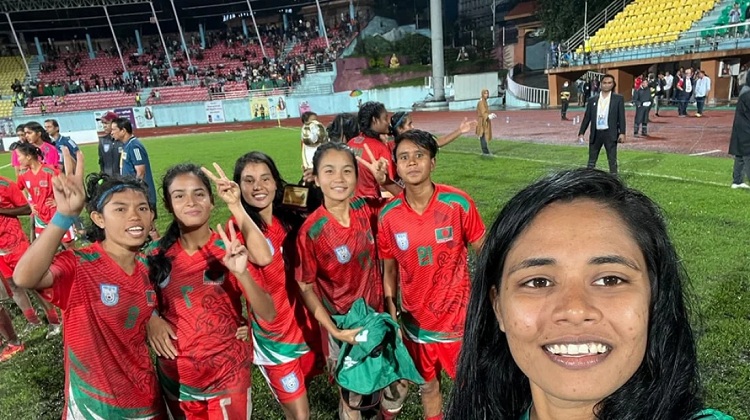 Clinching the SAFF Football Champisonship Trophy in Nepal, Krishna Rani Sarker and her team members have received warm reception on their return to the country. At the same time, they have also gone through bitter experiences. After returning to the Bangladesh Football Federation (BFF) building from the Dhaka airport at night, they found that their luggage were broken and their cash and other valuables were stolen.

The BFF has taken formal steps into the incident of stealing dollars from the luggage of two women footballers– Krishna Rani Sarker and Shamsunnahar.

Addressing a press conference at the BFF building on Thursday afternoon, BFF Women Wing chairman Mahfuza Akter Kiron said, “We have sent letters officially to the Biman Bangladesh Airlines and Civil Aviation Authority of Bangladesh (CAAB) about stealing of money from luggage. Besides, general diaries have been lodged with Motijheel and Airport police stations.”

Kiron also said if the stolen money is not found or the persons behind the incident of stealing can’t be identified, the BFF itself would return the money to the footballers.

BFF general secretary Abu Nayeem Sohag, who was present at the press conference, said the Shahjalal Airport Authority and CAAB have already started working on the matter. They will inform the CAAB after investigating the matter.

He said the incident of missing or stealing might have happened in Kathmandu. “We started our journey from Kathmandu. The girls moved at many places including Kathmandu and Dhaka Airport. After arrival at the BFF building, the luggage were here. If necessary, footage of other places along with the BFF building will be examined.