Sivakarthikeyan’s upcoming movie Doctor which was directed by Nelson Dhilipkumar. The film was earlier scheduled to hit the Screens on by this month March 26, 2021. But, now that the film’s release postponed due to the Tamil Nadu assembly election. The co-producer of the movie, KJR Studios, has issued a statement that they would be reworking on the date of its release.

Doctor will have actor Vinay Rai playing the antagonist role while Anirudh Ravichander has composed music for the film. The cinematography of Doctor has been handled by Vijay Karthik Kannan while R Nirmal managed the cuts of the film. The film is touted to be a comical action entertainer with Yogi Babu playing the supporting role alongside Sivakarthikeyan.

In a statement released by, KJR Studios, the makers of Doctor, said, “Doctor has been a wonderful experience from the word go; and your enthsiasm and love for the posters and songs have given us more energy. We were excited about bringing you the film on 26th March, 2021. Owing to the elections, we will be postponing the release to a later, more suitable date. We’re taking this call keeping the best interests of our film, the upcoming elections and most important the fans in mind.We are discussing a better release date with all the core members of the project and will announce it in a few days’ time. Until then, we request you to keep up the positivity and support you have showed Doctor from Day 1. We assure you; Doctor will be worth the wait! Enjoy the wonderful songs while we decide on a release date!” 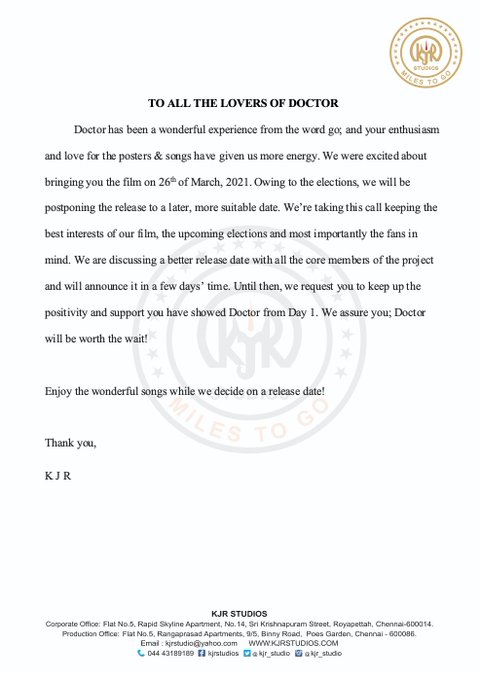 The cinematography of Doctor has been handled by Vijay Karthik Kannan while R Nirmal managed the cuts of the film. The film is touted to be a comical action entertainer with Yogi Babu playing the supporting role alongside Sivakarthikeyan. Doctor has been produced by Sivakarthikeyan Studios which also marks the Tamil debut of actress Priyanka Arul Mohan of Gang Leader (Telugu) fame. The film also features actors like Milind Soman, Arun Alexander, Sunil Reddy, Archana Chandhoke, Reddin Kingsley, and Avantikka Mohan playing important roles.

Sivakarthikeyan is also awaiting the release of the science-fiction drama titled Ayalaan that also features Rakul Preet Singh as the female lead. The movie is touted to be a science-fiction flick that revolves around an alien that lands on Earth. The movie is simultaneously releasing in Telugu, Hindi, Kannada and Malayalam.