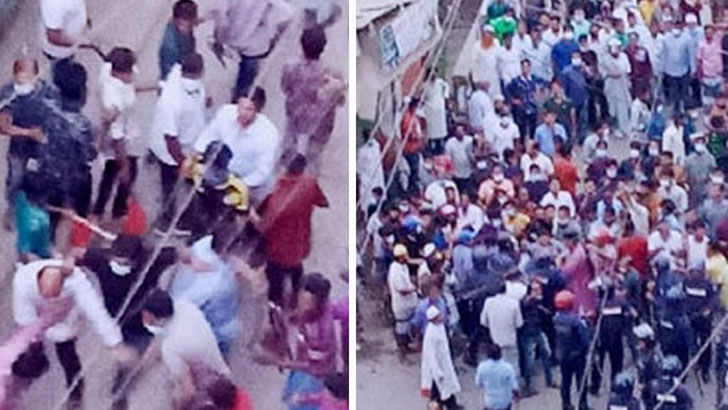 A man was killed and at least 50 people were injured in a clash between two groups of Awami League at Basurhat in Noakhali’s Companiganj upazila on Tuesday.
The clash took place reportedly between the supporters of Basurhat Municipality Mayor Abdul Quader Mirza and suspended Companiganj Upazila Awami League unit’s organizing secretary Mizanur Rahman (Badal) at Rupali Chattar area in Basurhat Municipality in the evening.
The deceased was identified as Alauddin, 32, son of Mominul Haque, of Char Kali village in the upazila. Local sources claimed that the deceased was a follower of Mizanur Rahman.
Locals said Mayor Abdul Quader Mirza’s supporters attacked and beat up Upazila Awami League unit president valiant freedom fighter Khizir Hayat Khan at Rupali Chattar on Monday afternoon.
As sequel to it, a section of upazila Awami League (Mizanur Rahman Badal and his followers) organized a protest rally at Rupali Chattar at 4.00 pm on Tuesday, condemning the attack on Khizir Hayat Khan. At one stage, Abdul Quader’s supporters tried to attack the protest rally at around 6.00pm.
During this time, when the supporters of both sides came face to face, there were chase and counter chase.
Witnesses said they had heard sounds of explosions and gunshots during the running battle which created a panic environment among the locals in the area.
One people was killed and at least 50 people from both sides were injured in the clash.  Several shops and auto-rickshaws were vandalized at that time.
Besides, four policemen, including officer-in-charge Mir Zahidul Haque Rony, were injured while trying to control the situation.
Noakhali General Hospital Residential Medical Officer Syed Mohiuddin Abdul Azim said Alauddin was brought  dead to the hospital around 11.00 pm. Besides, 11 more people who were shot were admitted to the hospital around 11:30 pm, he added.
Companiganj Police Station OC Mir Zahidul Haque Rony said Alauddin was killed during the clash between the two groups  at about 11:30 pm. He said, “People on both sides were injured in the clash. However, the situation is under control. Police have been deployed in Basurhat market.”
According to local sources, Chhatra League leader Zakir Hossain, who was critically injured in the shooting, was sent to Noakhali General Hospital for better treatment.
Besides, the injured people are taking treatment at various hospitals including upazila health complex.
75
Share