Shahid Kapoor broke many hearts when he announced his wedding to Mira Rajput. But with time, fans warmed up to Mira and went on to love the star wife for her candour, fashion choices, and for being Sasha’s loudest cheerleader. Apart from constantly shelling out couple goals, the duo also knows to have a little fun and go on to take the funniest jibes at each other.

Recently, Shahid went on to share the funniest lines in his Insta story that is definitely going to leave you too in splits. Writing about being fired by his wife, the Kabir Singh actor wrote, “My wife has fired me about how I am not doing a film which is fun and where I dance. Open invitation pl gimme something that allows me to please her. . #typecast hero in need !! @mira.kapoor I am committed to the cause. .” 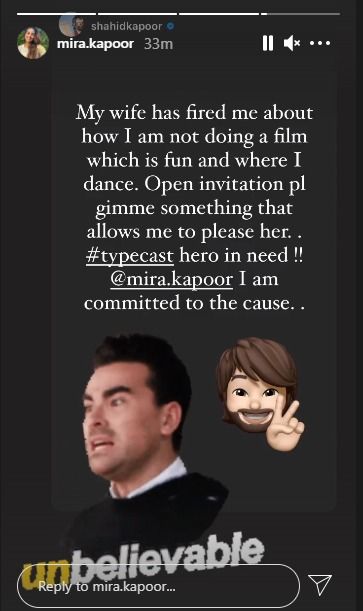 Shahid and Mira don’t shy away from having a little fun and their social media handles are proof of the same. The couple got married 5 years ago and are doting parents to Misha and Zain. The couple often take to social media to share the cutest family photos, weird snaps on social media followed by images of their meals and happy times.

While Mira has been influencing people with her love for organic products, skincare, haircare and fashion, Shahid has recently wrapped up the shooting for his next film, Jersey. The film is being directed by Gowtam Tinnanuri that also stars Pankaj Kapur, Mrunal Thakur, and Sharad Kelkar in pivotal roles. The film was originally made in Telugu with Nani and Rashmika Mandanna in the lead.