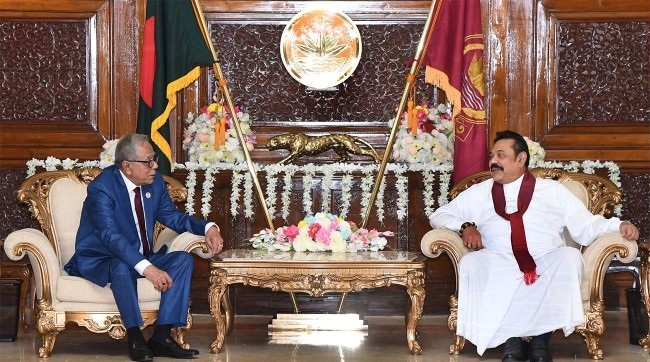 Visiting Sri Lankan Prime Minister Mahinda Rajapaksa stressed on exchanging experiences between Bangladesh and Sri Lanka in socio-economic development of the two countries as he paid a courtesy call on President M Abdul Hamid at Bangabhaban this afternoon.
“Bangladesh is moving forward on the path of rapid development,” said the Sri Lankan premier while lauding the ongoing socio-economic progress of Bangladesh.

During the meeting at Credential Hall here with the Bangladesh’s head of the state, Rajapaksa said he looked forward to properly utilise the development experiences in socio-economic progress of the countries in days to come.

President’s press secretary Joynal Abedin later told the BSS about the outcome of the meeting.

President Hamid also urged the investors of the two countries to come forward to exchange experiences of the development trend in respective countries in days to come.

Top-level officials, including ministers and from both countries, were present at the meeting.