South actresses appreciating their peers on social media has always been a spotlight-worthy moment for fans. Recently, Keerthy Suresh loaded her Instagram handle with her childhood pictures. The pictures went viral with several double-taps and numerous comments.

The comments section also included the name of Immaikka Nodigal actress Raashii Khanna among others. The pictures, shared by Keerthy, also had Revathy Suresh (Keerthy’s elder sister).  The Penguin actress wished on her sister’s birthday with the two throwback clicks. 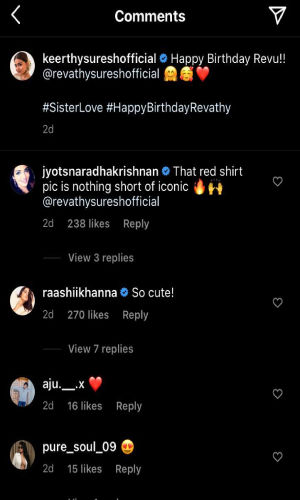 In the first picture, the little Revathy was seen kneeling down with her finger supporting the chain. Keerthy Suresh, as a baby, could be seen sitting on a tiny seater. The looks of both the sisters were vibrant and illuminated by cool lighting. The contrast of their costumes also added to the look and feel of the photo. 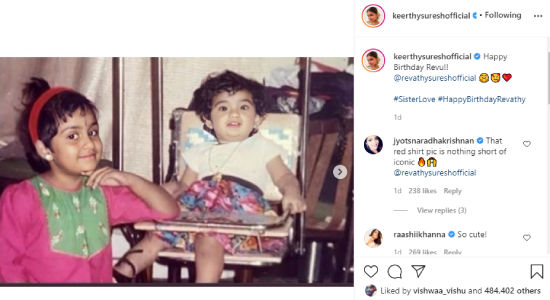 The second picture showcased the grown-up versions of both the sisters. As opposed to the earlier picture, this one was shot by framing the duo on the left. Revathy was embracing the little Keerthy’s shoulders in the warmly-lit photo. Both of them were dressed in cool colours. 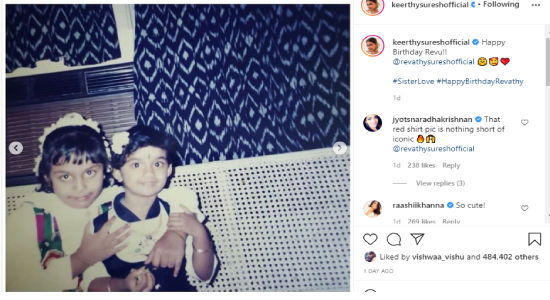 Raashii Khanna’s comment garnered many likes from the photo and video-blogging app users. It is not often, we see Keerthy sharing the moments of her family occasions on her social media. To recall a few, the actress had posted about her father G. Suresh Kumar and Mother Menaka Suresh earlier.

However, this was probably the first time, Keerthy uploaded the childhood pictures of herself and her sister together. Keerthy Suresh’s upcoming films include Annaatthe and Saani Kaayidham.