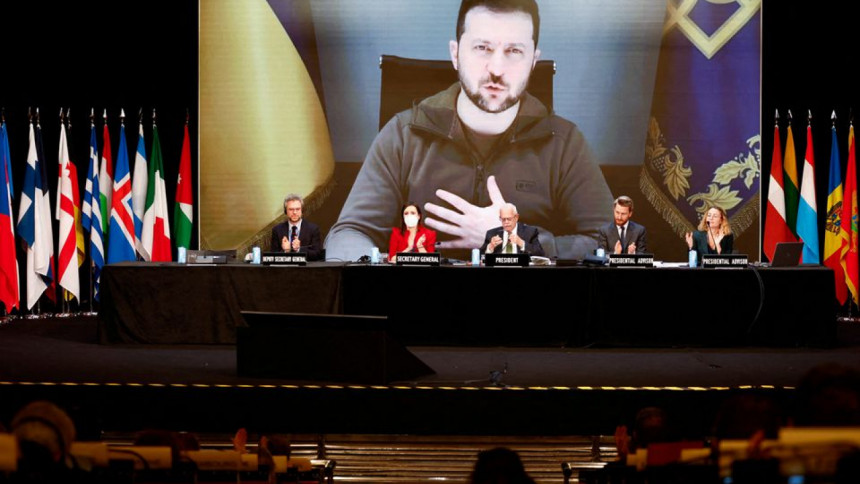 Ukrainian President Volodymyr Zelenskiy urged the United Nations Security Council to act against Russia over air strikes on civilian infrastructure that again plunged Ukrainian cities into darkness and cold as winter sets in.

Russia unleashed a missile barrage across Ukraine on Wednesday, killing 10 people, forcing shutdowns of nuclear power plants and cutting water and electricity supply in many places.

“Today is just one day, but we have received 70 missiles. That’s the Russian formula of terror. This is all against our energy infrastructure… Hospitals, schools, transport, residential districts all suffered,” Zelenskiy said via video link to the council chamber.

Ukraine was waiting to see “a very firm reaction” to Wednesday’s air strikes from the world, he added.

The council is unlikely to take any action in response to the appeal since Russia is a member with veto power.

The Russian president “will try to freeze the country into submission,” she added.

Russia’s UN ambassador Vasily Nebenzya responded by complaining that it was against council rules for Zelenskiy to appear via video, and rejected what he called “reckless threats and ultimatums” by Ukraine and its supporters in the West.

Nebenzya said damage to Ukraine’s infrastructure was caused by missiles fired by Ukrainian air defence systems that crashed into civilian areas after being fired at Russia’s missiles, and called on the West to stop providing Kyiv with air defence missiles.

The capital city of Kyiv was one of the main targets on Wednesday of the missile strikes. “Today we had three hits on high-rise apartment buildings. Unfortunately 10 people died,” said Interior Minister Denys Monastyrsky. Reuters was unable to independently verify the report.

Explosions reverberated throughout Kyiv as Russian missiles bore down and Ukrainian air defence rockets were fired in efforts to intercept them. Air raid sirens also blared across the country in a nationwide alert.

“Our little one was sleeping. Two years old. She was sleeping, she got covered. She is alive, thanks be to God,” said a man who gave his name as Fyodr, walking away from a smouldering apartment building that was hit in Kyiv, dragging a suitcase.

All of the Kyiv region, where over 3 million people live, lost electricity and running water, Kyiv’s governor said. Much of Ukraine suffered similar problems and some regions implemented emergency blackouts to help conserve energy and carry out repairs.

6 killed in US Walmart shooting