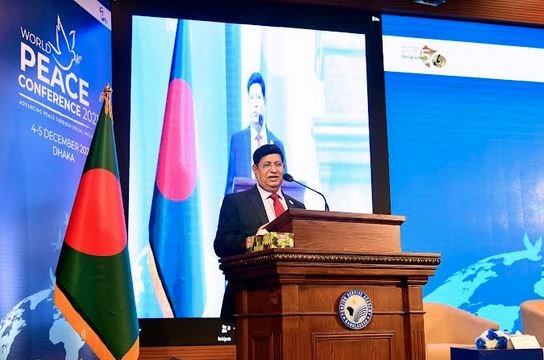 PM’s ‘Culture of Peace’ proposal at UN can ensure peace in world: Momen

The foreign minister made the remarks at the inaugural session of the “World Peace Conference” at Hotel InterContinental here in the afternoon.

Sheikh Hasina allowed nearly 176,000 of the country’s men and women to work as UN peacekeepers in many missions abroad, he said, adding Bangladesh is a brand-name in the UN peacekeeping.

The Ministry of Foreign Affairs is organizing the two-day conference as part of twin celebrations- the birth centenary of Father of the Nation Bangabandhu Sheikh Mujibur Rahman and the Golden Jubilee of the country’s independence.

President M Abdul Hamid addressed the inaugural session as the chief guest with President of the Organizing Committee of the World Peace Conference and Jatiya Sangsad (JS) Speaker Dr Shirin Sharmin Chaudhury in the chair.

Momen said, “Since his early childhood, Bangabandhu was a benevolent social activist. The principal objective of his life was to ensure the wellbeing of people. His lifelong struggle was for establishing people’s right in a peaceful manner”.