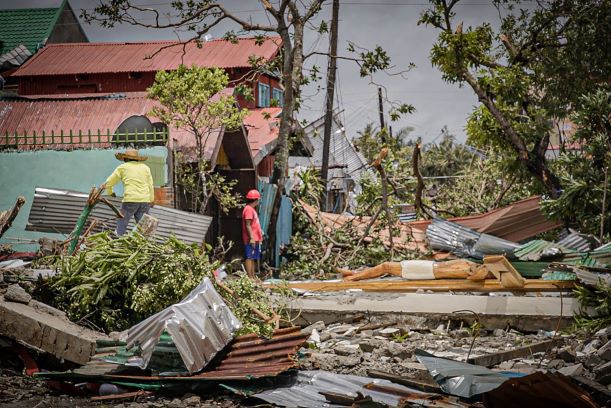 Typhoon Goni, Asia’s most powerful typhoon this year, has made landfall in the Philippines with maximum sustained winds of 225km/h (140mph).

It has since crossed onto the main island of Luzon, where the capital Manila is located, reports BBC.

Almost a million people have been evacuated from their homes.

In a severe weather bulletin, the Philippine Atmospheric, Geophysical and Astronomical Services Adminstration (Pagasa) warned of “flooding (including flash floods), rain-induced landslides, and sediment-laden streamflows” in areas of Luzon, as well as the islands of Visayas and Mindanao.

“Within the next 12 hours, catastrophic violent winds and intense to torrential rainfall… will be experienced,” it said. The storm is moving west at 25km/h, and is expected to cross over Luzon south of Manila and continue into the South China Sea on Sunday afternoon.

This time, preparations have been made complicated by the Covid-19 virus, which has already caused 380,739 infections and led to 7,221 deaths in the Philippines.

“We are having a hard time with Covid-19, and then here comes another disaster,” Senator Christopher Go, the top aide of President Rodrigo Duterte, told a virtual news conference.

Some 1,000 coronavirus patients in Manila and nearby Bulacan province currently housed in large isolation tents might be moved into hotels and hospitals, he also said.

BNP’s existence won’t be found even under 1000 volt light: Quader

‘I hear your anger, but won’t accept violence’