Bollywood actress Payal Ghosh, who has accused filmmaker, Anurag Kashyap of sexual harassment, took to social media to comment on the Manmarziyaan director yet again. The actress, in her tweet, recalled her first meeting with another filmmaker, Sooraj Barjatya. Ghosh said that she thought life is full of roses after meeting the Prem Ratan Dhan Paayo director for the first time. However, the meaning changed for her after she met Kashyap, wrote the actress.

Calling Kashyap and Barjatya “two sides of a coin”, Ghosh said that the meeting changed her as a person. The actress then said that her life looks better now and she feels as fresh as when she started her career in films.

“The first time I met Sooraj Barjatya Sir, thought’life is full of roses’& when I met Mr. Kashyap the whole meaning changed.Two sides of a coin. It changed me to a different person than what I used to be .. anyway life looks better now,feeling fresh as the early days of my career,” read Ghosh’s tweet. 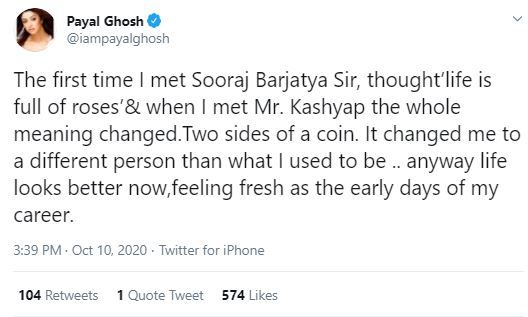 The actress has accused Kashyap of sexual misconduct and has filed an official complaint against him. Kashyap, however, has denied all the accusations and is pursuing the matter legally.

This, however, isn’t the first time that Ghosh has attacked the filmmaker on social media. Recently, she had tweeted about the failure of Kashyap’s Bombay Velvet and later deleted the post. “Mr Kashyap gives chance to only strugglers or failed actors and 1-2 among them have shined out..he makes middle budget movies and promotes those 10-12crs movies .. once he tried his hands on big project like #bombayvelvet and he failed miserably. Sad na.. !!,” she had written.

The actress was also in the news after Richa Chadha filed a defamation suit, seeking the former’s apology for dragging her name in the case.

Vijay Deverakonda reacts after receiving backlash for his ‘pro-dictatorship’ comment