On completing 8 years in Bollywood, Varun Dhawan thanks people

Varun Dhawan, who has completed eight years in Bollywood, expressed gratitude to his fans for believing in him with a heartfelt note. The 33-year-old actor took to Twitter on Monday to share the thank you note along with a series of pictures clicked during the promotion of his films.

“It’s been 8 years since this journey began between me and u. Thank u for believing in me when no one did. I remember every city I toured. The signs, letters, gifts, tattoos, and most importantly the love,” he wrote.

Varun made his Bollywood debut in Karan Johar’s 2012 film Student of the Year, which also featured Alia Bhatt and Sidharth Malhotra. He played the role of Rohan Nanda, the teenage son of a rich businessman, who competes with his classmates to win an annual school championship. 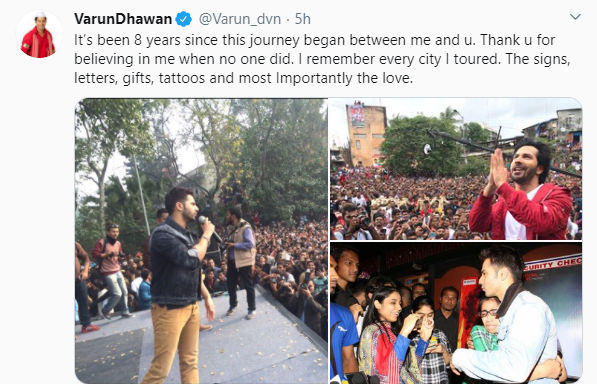 He then appeared in films from various genres like, Humpty Sharma Ki Dulhania, Main Tera Hero, Badlapur, Dishoom, and ABCD 2 among others. He was last seen in Street Dancer 3D. Varun will be next seen in Coolie No. 1 along with Sara Ali Khan, directed by his father David Dhawan. The film is expected to release around Christmas.