The newly-released official trailer of Anurag Basu’s Ludo has left Aamir Khan mighty impressed. Soon after the release of the trailer on Monday, the superstar took to his Twitter account to shower praise on it.  He also requested Anurag to hold a “virtual industry screening” for some of his colleagues.

Aamir penned a note that read, “What a trailer !!! Basu, hats off ! Congratulations to the entire team! Can’t wait to watch it. Kab tak wait karna padega? Basu, why don’t you hold a virtual industry screening for some of your colleagues 😉 ?”

Abhishek Bachchan, who plays one of the important roles in the multi-starrer film, responded to Aamir’s note and wrote, “thank you Aamir.” 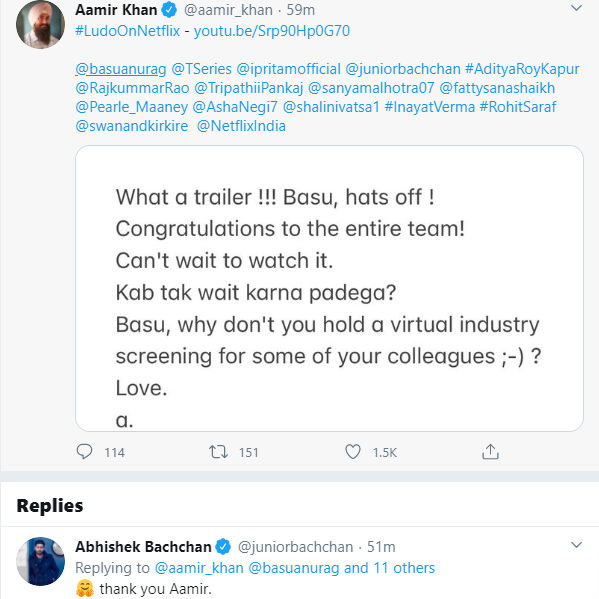 Ludo also features Rajkummar Rao, Fatima Sana Shaikh, Aditya Roy Kapur, Sanya Malhotra, Pankaj Tripathi, Rohit Suresh Saraf, Pearle Maaney and Asha Negi in important roles, among others. Ludo is four different stories tied together by inevitable circumstances and coincidences far beyond one’s understanding, all of which make up for a crazy caper of a film.

Aamir is not the only one who has liked the trailer of Ludo. There are many on the internet who have found the trailer impressive. A volley of netizens are saying that after watching the trailer, they are excitedly looking forward to the film.

Ludo was initially scheduled to hit the silver screen on September 6 last year. However, due to multiple delays, its release was postponed. Owing to the COVID-19 pandemic, the makers decided to skip the theatrical release and take the direct-to-digital path instead. The film will premiere on Netflix on November 12.

When Aamir Khan created controversy by writing on his blog, ‘Shahrukh is licking my feet’

Aamir, meanwhile, has been busy with the shooting of his upcoming film, the much-in-news Laal Singh Chaddha. The film, co-starring Kareena Kapoor Khan, is slated to hit the silver screen on Christmas next year. It is directed by Advait Chandan of Secret Superstar fame.

On completing 8 years in Bollywood, Varun Dhawan thanks people