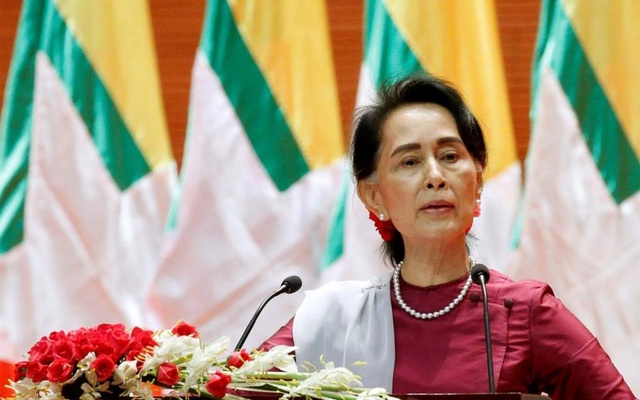 Ousted Myanmar civilian leader Aung San Suu Kyi, who has not been seen since last month’s military coup, is due to face court Monday after a deadly weekend crackdown against relentless democracy protests.
Security forces opened fire on unarmed demonstrators in four cities on Sunday, with the UN saying it had credible information at least 18 people had died.

One person among a group of protesters crouching behind rubbish bins and other makeshift shields in Yangon, the commercial capital, was shot and had to be dragged away by others, according to video footage filmed by AFP.

“We strongly condemn the escalating violence against protests in Myanmar and call on the military to immediately halt the use of force against peaceful protesters,” Ravina Shamdasani, spokeswoman for the UN human rights office, said.

AFP independently confirmed eight deaths in Sunday’s violence, although there were fears the toll could be much higher.

The Assistance Association for Political Prisoners, a reliable monitoring group, estimated that about 30 people have been killed by security forces since the coup on February 1.

Suu Kyi, 75, was detained before dawn on that day, and has not been since in public since.

The military has justified its takeover, ending a decade-long democratic experiment, by making unfounded allegations of widespread fraud in last November’s national elections.

Suu Kyi’s National League for Democracy won the election in a landslide.

The generals have hit Suu Kyi with two charges the international community widely regards as frivolous — relating to importing walkie talkies and staging a campaign rally during the pandemic.
89
Share