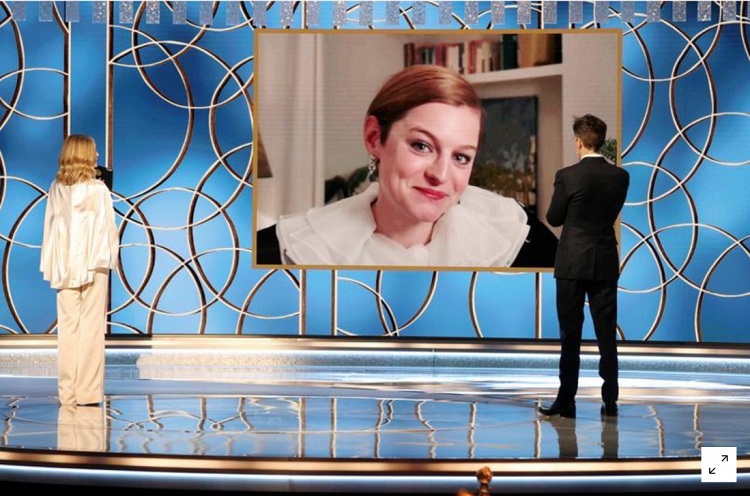 Drama “Nomadland” and satire “Borat Subsequent Moviefilm” won movie honors at the Golden Globes on Sunday in a mostly virtual bicoastal ceremony that was marked by impassioned calls for more diversity and the dominance of Netflix.
“Nomadland,” a moving drama about van dwellers in recession-hit America from Searchlight Pictures, also took the best director prize for Chinese-born Chloe Zhao. It made Zhao only the second woman to win at the Globes in that category, and the first woman director of Asian descent to win.”For everyone who has gone through this difficult and beautiful journey at some point in their lives, this is for you,” said Zhao.

“We don’t say goodbye, we say see you down the road,” she said, quoting a line from the movie.

The two wins for “Nomadland” increased the profile of the film ahead of nominations in March for the Oscars.

Sacha Baron Cohen, the creator of “Borat Subsequent Moviefilm” from Amazon Studios was named best comedy movie actor, while singer Andra Day was a surprise winner for her lead role in “The United States vs. Billie Holiday.”

“Donald Trump is contesting the result!” Baron Cohen joked about the win for the “Borat” sequel, which was a satire on the America of the former U.S. president.

Nevertheless, the streaming service was the biggest winner on Sunday, with four wins in the movie field and six for television, including best TV drama series “The Crown” and limited series chess saga “The Queen’s Gambit.”

The usual chummy gathering of A-listers at a gala dinner in Beverly Hills, California, was replaced by webcams in the homes of celebrities that were either dressed up or, like “Ted Lasso” star Jason Sudeikis, in casual garb.

Hosted by Tina Fey in New York and Amy Poehler in Beverly Hills, the small physical audiences were made up of masked frontline workers.

Alia Bhatt and Gauri Khan collaborate for Darlings; Shah Rukh Khan has a sweet message for them