Bollywood actors are often seen walking that extra mile required to perfect their role. Be it undergoing rigorous training sessions, workshops or body transformation, stars over years have shown that behind the fame, lies underlying efforts that help them achieve the title of ‘superstar’. Well, one of the finest actresses of the country, Kangana Ranaut’s biopic on former Chief Minister of Tamil Nadu, the late J. Jayalalithaa titled Thalaivi has been the talk of the town, ever since the project was announced.

Starring Kangana as the female lead, Thalaivi required the actress to feature a slightly bulked-up avatar for which, the actress had gained 20 kgs. While her sister Rangoli Chandel had once announced that the actress will shed her weight for her upcoming projects Dhaakad, Tejas, looks like the prep has already started. Kangana posted an awe-inspiring photo of herself, flaunting her amazing transformation.

Taking to Twitter, wherein she is seen perfecting a yoga posture, Kangana wrote, “I had gained 20kgs for Thalaivi, now that we are very close to completing it, need to go back to my earlier size, agility, metabolism and flexibility. Waking up early and going for a jog/walk …. who all are with me ?” Check out the photo here: 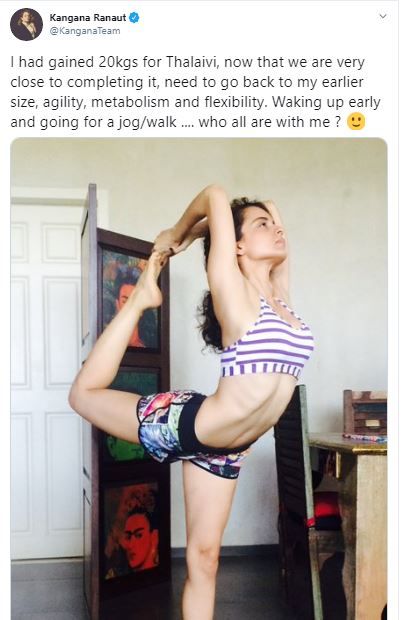 Fans were impressed with Kangana’s photo and posted comments like “Awesome You!!! Advanced Yoga practitioner! It takes a lot of work to reach the level you are at!! Hope this inspires others too. Great job! God Bless You!!”, “I do this everyday day without fail. Sun never takes break and he rises everyday like that we shd do yoga / exercise everyday Thumbs up”, amid others. Take a look:

Every now and then, Kangana, her fan pages post BTS photos of the actress from the sets of Thalaivi, where she looks like a spitting image of the late actress-politician, on whom the biopic is based.