Finally the much-awaited break for Priyanka Chopra Jonas! The diva has taken to social media to share a happy photo from her Europe trip and we bet, the same will trigger your wanderlust!

With some relaxation in lockdown rules, netizens are heading off to the much-needed vacation to pamper themselves. And when it comes to taking a trip, our favourite celebs are not far behind. Recently, Bollywood and Hollywood actress Priyanka Chopra Jonas has taken to social media to share a photo from her Europe trip and it is all things adorable.

From the past few weeks, we have seen Priyanka working continuously on finishing her memoir, titled Unfinished. And now, as she has finished the same and the book is already a bestseller, the diva has taken some time off to rejuvenate herself. Priyanka is an ardent social media user and fans look up to the actress for major inspiration in almost every field. From ruling both Bollywood and Hollywood to now becoming one of the bestsellers, Priyanka never fails to amuse her fans and followers with her talent.

In the latest photo that Priyanka has shared on her Instagram, the stunner is looking all happy as she jumps in the air with joy. Dressed in a white sweatshirt, blue denim and black boots, Priyanka is shelling major vacation goals. Though she is enjoying her vacation, she has not forgotten the safety measures. Priyanka completed her look with a black face mask.

Priyanka captioned the photo as “See you at the crossroads.” 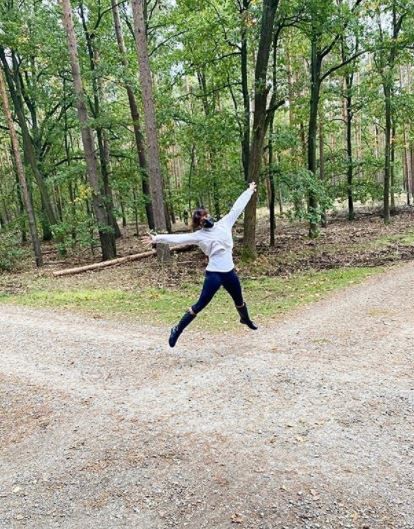 The photo has left fans excited and they have taken to the comment section to shower their favourite star with love. One wrote, “Bhtt achi lgti ho ap,” another one commented, “So cute.” “Love you Priyanka,” read another comment. Check the comments below:

On the work front, Priyanka was last seen in Shonali Bose’s The Sky Is Pink, alongside Farhan Akhtar, Zaira Wasim, and Rohit Saraf. Next, the actress has a wedding comedy alongside American actress Mindy Kaling. She will also be seen alongside RajKummar Rao in the film adaptation of The White Tiger.

Shah Rukh Khan’s look in Pathan on the lines of his look in Don 2?