Anushka Sharma and Virat Kohli are hands down, one of the cutest pairs in tinsel town. After dating for a few years, the couple tied the knot in 2017 in a hush-hush ceremony in Tuscany. In August 2020, the couple announced that they are all set to become parents soon.

And the couple are now proud parents to a baby girl! The Indian skipper has just taken to his social media handle to announce the birth of his little girl. He wrote, “We are thrilled to share with you that we have been blessed with a baby girl this afternoon. We thank you for all your love, prayers and good wishes. Anushka and the baby are both healthy and we are feeling beyond blessed to start this new chapter of our lives. We hope that you can respect our privacy at this time.” 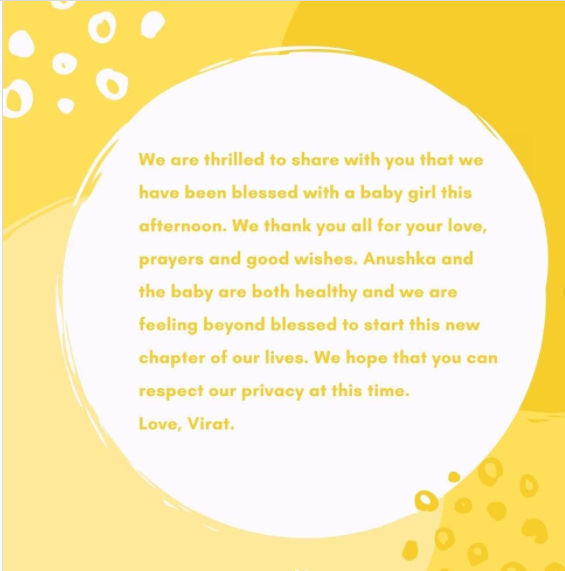 Anushka recently featured on the cover of Vogue India flaunting her baby bump. During an interaction with the magazine, Anushka revealed that the couple plan to keep their child away from social media’s glaring eyes. The actress further said, “We’ve thought about it a lot. We definitely do not want to raise a child in the public eye—we don’t plan on engaging our child in social media. I think it’s a decision your child should be able to take. No kid should be made to be more special than the other. It’s hard enough for adults to deal with it. It’s going to be difficult, but we intend to follow through.”

Working until the very last day, Anushka went on to flaunt her baby bump in style as she shot for a few commercials during the third trimester. After her pregnancy announcement, the actress took off to Dubai along with Virat who was playing for the IPL. Anushka kept in touch with her fans by constantly sharing snaps on her social media handle.