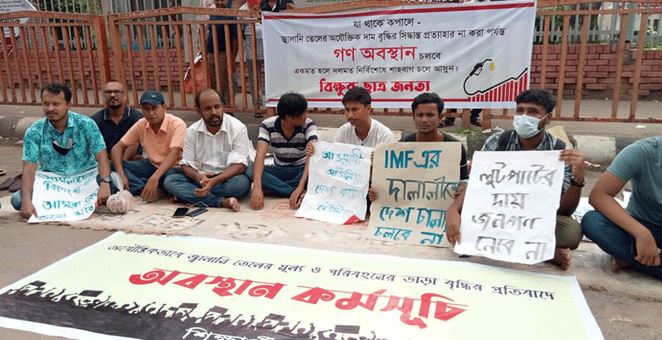 A group of people have started a sit-in programme at Shahbagh in the capital demanding the withdrawal of increased fuel prices.
They arranged the protest under the banner of “Bikshubda Chhatra-Janata” in front of National Museum for the second consecutive day on Sunday.
They begun the protest in the evening on Saturday and was seen continuing the protest for the second day.
The agitators announced that they will continue their sit-in programme until their demands are met.
According to source, a group of students blocked Shahbagh intersection on Saturday evening. They then staged demonstration there for about an hour.
Later, at 7.00pm they came in front of the National Museum and started sit-in there.
Leaders and workers of various students, labor organizations and political parties joined their sit-in programme to express solidarity.
Student Mohidul Islam Daud, who is leading the protest, said that their mass sit-in programme will continue until the increased price of fuel is withdrawn.
17
Share