The release date of the first single from Madhavan and Shraddha Srinath-starrer Maara has been announced. The film will have music by Ghibran.

The release date of the first single from Madhavan and Shraddha Srinath-starrer Maara has been announced. The film has been directed by Dhilip Kumar, with music by Ghibran of Vaagai Soodava fame. Titled Yaar Azhaipadhu, the single will have Sid Sriram’s vocals, according to the announcement.  The single will be released tomorrow, which Madhavan revealed on his social media handle.

Maara is produced by Pramod Films and it is the official remake of Malayalam blockbuster Charlie (2015). Charlie starred Dulquer Salmaan, Parvathy Thiruvothu, Toviono Thomas and Nedumni Venu in important roles. Madhavan will reprise the role of Dulquer while Shraddha Srinath will be seen as Tessa, which was played by Parvathy.

Charlie was directed by Martin Prakkat and had Gopi Sundar’s mellifluous music. The film provided a visual extravaganza to the audience. As Charlie, Dulquer Salmaan’s performance captured the attention of the fans.

Madhavan’s previous film was Silence that was released on Amazon Prime Video. The film had Anushka Shetty and Shalini Pandey in important roles. The film failed to engage the audience. Madhavan’s role as a cello player lacked authenticity. 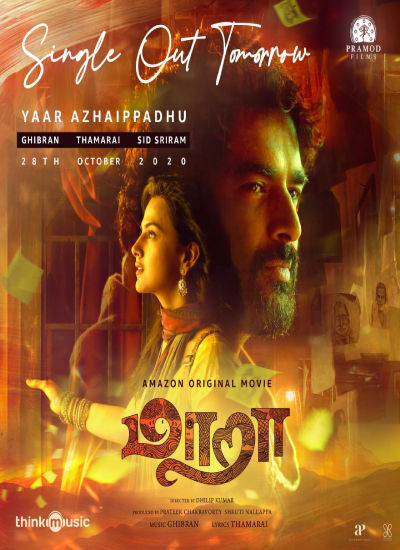 Madhavan and Shraddha Srinath have already acted together in the film Vikram Vedha (2017), directed by Pushkar Gayatri. The film also had Vijay Sethupathi in the lead role apart from other supporting actors, Varalaxmi Sarathkumar, Kadhir, Prem, Vivek Prasanna and Hareesh Peradi.

Vikram Vedha had set a benchmark in Madhavan and Vijay Sethupathi’s career with its blockbuster success at the box office. The film had music by Sam CS and was produced under Y NOT Studios of Sasikanth.