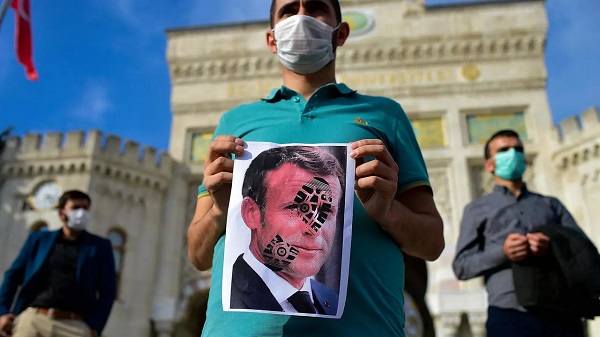 The backlash against President Emmanuel Macron’s comments on Islam intensified Sunday, with Turkish President Recep Tayyip Erdogan again urging him to have “mental checks” and protests in Muslim-majority nations.
Speaking after teacher Samuel Paty was beheaded for showing caricatures of the Prophet Mohammed to pupils in a lesson on free speech earlier this month, Macron vowed France would “not give up cartoons” and said Paty “was killed because Islamists want our future”.
But Erdogan on Saturday urged Macron to have “mental checks” for treating “millions of members from different faith groups this way” — comments which prompted Paris to recall its envoy to Ankara.
The Turkish leader doubled down on those comments Sunday, accusing Macron of being “obsessed with Erdogan day and night”.
“(Macron) is a case and therefore he really needs to have checks,” he said in a televised speech in the eastern Anatolian city of Malatya.
Relations between Macron and Erdogan have become increasingly strained over geopolitical issues ranging from a Greek-Turkish maritime dispute to the conflict between Armenia and Azerbaijan.
The European Union’s top diplomat, Josep Borrell, called the comments Erdogan made on Saturday “unacceptable” and urged Turkey “to cease this dangerous spiral of confrontation.”
– ‘Attacking Islam’ –
Anger at Macron spilt over into the streets in several Muslim-majority countries, with further demonstrations expected Sunday.
Pakistani Prime Minister Imran Khan accused Macron of “attacking Islam”.
89
Share