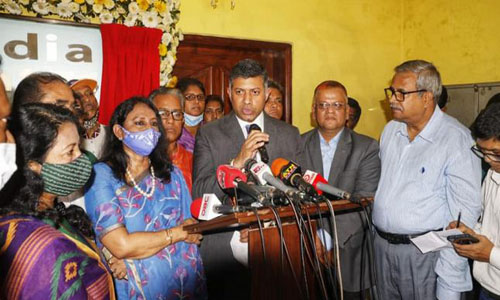 Indian High Commissioner to Bangladesh Vikram Kumar Doraiswami on Monday laid emphasis on ensuring the best possible understanding between Bangladesh and India, as the two countries are set to take the ties to a new height.

While inaugurating the renovated Media Centre at the Jatiya Press Club, the High Commissioner termed Bangladesh media “vibrant, free, colourful and very vocal”. “I would say very vocal media that you’ve in Bangladesh.”

The High Commissioner said he is delighted to be here at the JPC in this big and important month as the partnership between the two countries is going forward.

He said the JPC is a place that encapsulates the spirit of Bangladesh and thanked the JPC for giving them an opportunity to become partner in upgrading the media center. “I hope this helps facilitate your very important works….”

He wished all a very happy month of Independence.

She recalled the Indian High Commission’s contributions towards upgrading the Media Centre.