July 7 turned out to be a black day as legendary Bollywood actor and ‘tragedy king’ of Indian cinema, Dilip Kumar left for his heavenly abode. The 98-year-old actor was unwell for a very long time before he breathed his last yesterday. He is survived by his wife, veteran actress Saira Banu.

As the nation continues to mourn Kumar’s demise, a number of Bollywood celebs arrived at his residence to pay their last respects. Kumar’s Anokha Milan co-star Dharmendra was one among many stars who attended his funeral in Mumbai.

Taking to Twitter, the Apne actor posted a heartbreaking note as he held “brother” Kumar one last time in his arms. A visibly emotional Dharmendra was seen sitting on the floor with the late actor’s mortal remains.

Earlier, Dharmendra paid tribute to Dilip in an Instagram post as he shared a throwback picture with him. “Extremely sad to loose my most affectionate brother in the industry . Jannat naseeb ho , Hamare Dalip Sahab ko,” he had written. 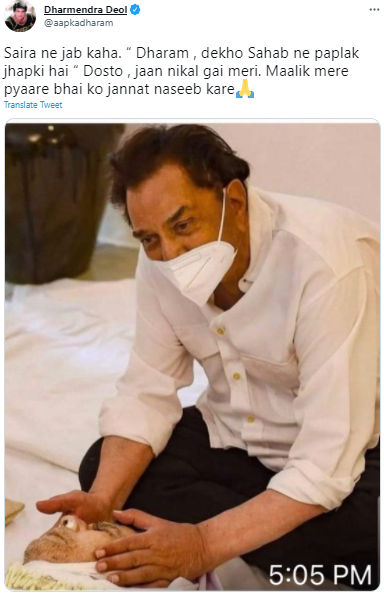