Alaya F’s relationship with Bal Thackeray’s grandson Aaishvary has become the talk of the town. The Jawaani Jaaneman actress is currently in Dubai for his birthday along with Aishvary’s mother Smita Thackeray. The fact Alaya is so close to Aaishvary and the Thackeray family is now raising eyebrows with netizens wondering if they are friends or more than just friends.

Smita Thackeray shared an adorable video of Aaishvary ringing in his birthday with close friends at a restaurant in Dubai. While Alaya has not made it to the video, she has been tagged in the caption that reads, “Bring in Birthday #AaishvaryThackeray#Son#dubai #Play Restaurant #Good music with #alayaf #Fayzal Zarooni #prashitachaudhary #Fun night”

Aaishvary, on the other hand, has not shared any picture with Alaya but he’s posted a snap from his birthday bash on his Instagram story and has tagged Alaya and mom Smita with a big heart emoji.

Alaya’s presence at Aaishvary birthday bash has also brought back their old pictures in news. Back in November 2019 during Alaya’s birthday, Aaishvary was very much a part of the do. Alaya had even shared photos with him on Instagram along with an amusing caption that read, “Turned 22 yesterday and remembered why I stopped wearing red lipstick when I was 18.”

In the photos, Alaya and Aaishvary can be seen enjoying each other’s company. 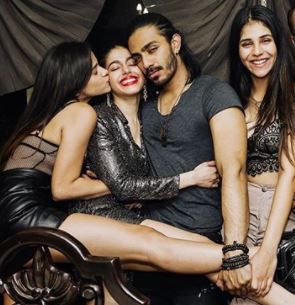 Meanwhile, Alaya’s picture by the sea is setting the temperature soaring on Instagram. She’s enjoying the Dubai life and has shared a super amazing pic to let the world know about it.

On the professional front, Alaya is yet to announce her next film post her debut film Jawaani Jaaneman, co-starring Saif Ali Khan. The beauty, who is Pooja Bedi and Farhan Furniturewala’s daughter, received rave reviews on her performance from the critics as well as the audiences alike.