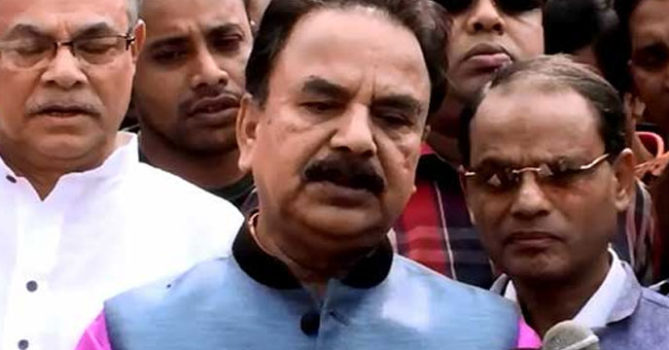 Stating that the current government is deadlier than Coronavirus, BNP senior leader Gayeshwar Chandra Roy on Friday said it is now on “life support” like the health sector of the country.
“The country’s health sector is now on ventilation and the government is not out of the ventilation. There’s no one to remove the ventilation pipe to ensure its fall. There’s no support, except life support, for this regime which came to power through vote robbery without public support,” he said.

The BNP leader made the remarks while speaking at a doa mahfil at the party’s Nayapaltan central office arranged by Swadhinata Forum seeking early recovery of its president Abu Naser Mohammad Rahmatullah, UNB reports.

Gayeshwar, a BNP standing committee member, said the tenure of the Awami League government will end soon if people take the responsibility for removing the life support of it. “I’m not telling any story, as it’s based on the current political condition.”

Gayeshwar said their party can understand and identify the current disease of the government and politics, but cannot apply the right medicine to get rid of it.

He called upon BNP leaders and activists to concentrate on freeing the nation from the ‘oppression’ of the current government instead of thinking about making personal gains and getting party posts.  “No achievement can be bigger than restoring democracy, and we should now focus only on it. We can hold big positions, big titles, but these are nothing but a burden in a state where people have no right.”

The BNP leader said many people are getting affected with Coronavirus while many are dying as the government has failed to tackle it and take effective preventive measures.