Actor Akshay Kumar recently made an appearance on Karan Johar’s chat show ‘Koffee With Karan’ with Bollywood livewire Ranveer Singh. In the photos shared on the social media, the two are seen getting along like a house on fire and having a fun-filled ride with host KJo.

Akshay also said that he feels Ranveer ‘is me’. Happy to hear the comment, the latter replies, “Aur tareef karo meri! (Praise me more),” to which Akshay was quick to reply, “Chup rahega to na! (Only if you keep quiet).

The official Twitter handle of the channel shared the promo with the caption, “There’s no way to prepare for the whirlwind of fun headed your way.” 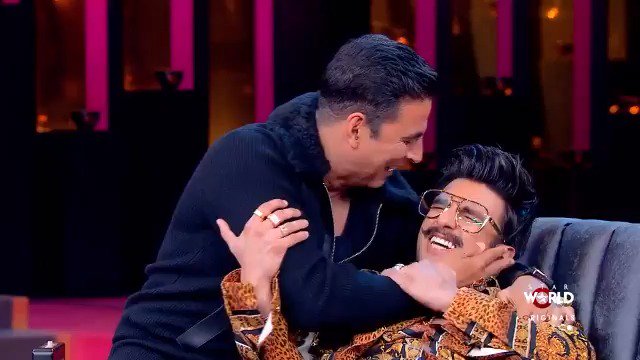 It is also anticipated that Hollywood biggie Will Smith will appear on the show. Earlier, KJo had shared a pic in which he and Ranveer are sharing the frame with the international celebrity. However, it is not yet confirmed if Smith will be a part of the show or he just dropped on the sets to meet KJo.

On the professional front, Akshay is busy shooting for ‘Housefull 4’ while Ranveer has films like Zoya Akhtar’s ‘Gully Boy’, Rohit Shetty’s ‘Simmba’, Kabir Khan’s ’83’, and Karan Johar’s ‘Takht’ in his kitty.