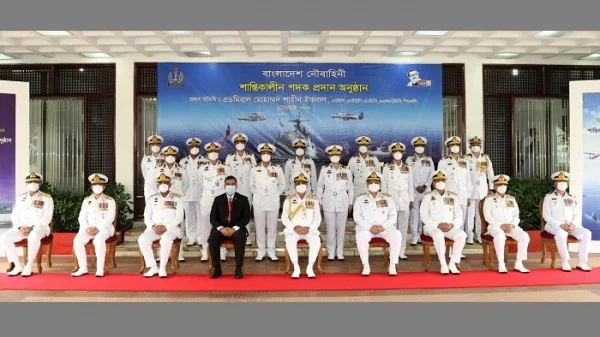 40 navy personnel get awards for heroism

A total of 40 Bangladesh Navy officers and sailors on Saturday received awards on the occasion of ‘Armed Forces Day 2020’ for their peacetime contributions and heroics in 2019.

Chief of Naval Staff Admiral M Shaheen Iqbal has conferred medals to the naval personnel on behalf of Prime Minister Sheikh Hasina at an award-giving ceremony at Jupiter Hall of Naval Headquarters at Banani in the capital on Saturday.

Besides, the Chief of Naval Staff awarded “Oshamanno Sheba Padak” to 4, “Bishitho Seba Padak (BSP) to 2, “Nou Gourob Padak (NGP)” to 4, Nou Utkorsho Padak (NUP) to, and “Nou Parodorshita Padak (NPP)” to one.

Other PSOs and senior officials of the naval headquarters were present at the time. Other officers and sailors were awarded medals by the respective naval administrative authorities of Dhaka, Chattogram and Khulna naval areas.

Govt to import 50,000 metric tonnes of rice from India