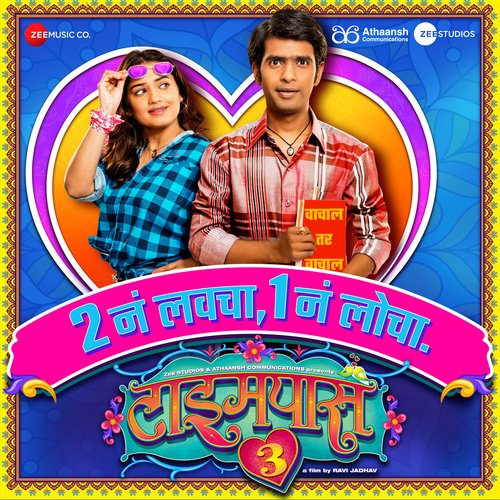 After the premiere of successful Marathi films, Pandu, Zombivili and Dharamveer, ZEE5 Global, the world’s largest streaming platform for South Asian content, is all set to premiere Timepass 3 on the platform on 16th September. Directed by Ravi Jadhav, the third film in the franchise stars Prathamesh Parab and Hruta Durgule in lead roles.

Filmmaker Ravi Jadhav came up with Timepass in 2014 and followed it up with a sequel in 2015. The first film told the love story of two adolescents, Dagdu and Prajakta, played by Prathamesh Parab and Ketaki Mategaonkar. Timepass 2 was set 15 years after the first one and starred Priyadarshan Jadhav and Priya Bapat. In the third instalment of the franchise, the story returns with a younger Dagdu played by Prathmesh Parab again. All three movies of the franchise are available on ZEE5 Global.

This time, Dagdu who has finally cleared his class XII exam with no less than 36% marks is all set to step into the world of college. Dagdu’s determination of leaving behind his days as a goon and start afresh is constantly tested by the people around who feel he will never change. But he has a new reason to keep going as he falls in love with a fellow student, Palvi who is the daughter of a gangster. Palvi is impressed by Dagdu’s gentlemanly image but like all good things must come to an end, Dagdu’s pretend-behaviour does too. Does that hamper Dagdu-Palavi’s relation though? That is what remains to be unfolded in this instalment.

With an IMDB rating of 7.3, Timepass 3 also stars Sanjay Narvelar, Bhau Kadam, Vaibhav Mangle in pivotal roles. The movie is an out and out entertainer with lots of humour and romance. Produced by Athaansh Communicationand Zee Studios, the movie is set to premiere on ZEE5 Global on 16th September.

Archana Anand, Chief Business Officer, ZEE5 Global said, “At ZEE5 Global, we have always endeavoured to bring the best of South Asian entertainment to global audiences. We already have a significant  library of blockbuster Marathi films like Pandu, Zombivili, and Dharamveer on our platform. We are elated to now add Timepass 3 to this list. The film is a perfect blend of humour and drama, and a complete family entertainer. We are confident that our global audiences would appreciate this film”.

Director Ravi Jadhav said, “Witness our film’s second innings on India’s largest homegrown OTT platform, ZEE5 Global on 16th September. Timepass is the biggest and the most successful franchise in Marathi cinema and each film has been made with a lot of heart, humour, good intentions and a purpose to entertain. So, we hope that our efforts put into the latest instalment, Timepass 3 reaches more and more people via its digital premiere and is a superhit like its predecessors”.

Actor Prathamesh Parab said, “Timepass 3 is a film really close to my heart and returning to this franchise felt like returning home. I am glad that I could be a part of this mass entertainer and now with its digital premiere, we hope to reach out to the Marathi viewers across 190+ countries as that’s the might of ZEE5 Global!”.

Actor Ketaki Mategaonkar said, “It was a fun ride shooting for this film and an honour to be a part of this successful franchise. Now that the film belongs to the fans, I am excited for them to sample the film on ZEE5 Global  and shower their love. I hope that the World Digital Premiere is a success”.

Stream Timepass 3 streaming from 16th September only on ZEE5 Global

Mamata flays Modi govt for not inviting her to meet Hasina

A chance to get the mental edge