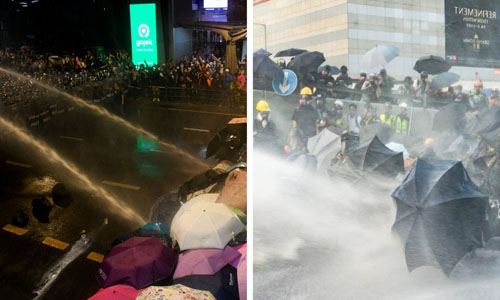 Thai democracy activists are increasingly adopting tactics used by their counterparts in Hong Kong, as they defy a ban on gatherings after months of mounting protests targeting the prime minister and king, reports BBC.

When demonstrators in Bangkok held up umbrellas to shield themselves from tear gas fired for the first time last Friday, it was strikingly reminiscent of the anti-government protests that shook the Chinese territory last year.

From helmets and gas masks to flashmobs and hand signals, Thailand’s student-led movement is drawing on the experience of Hong Kong’s young activists in its own fight for change.

Here are three echoes of the Hong Kong protests in Thailand.

Leaderless movement: ‘We are all leaders today’

After the arrest of many of Thailand’s protest leaders last week, activists have changed tack.

“They think arresting the leaders will stop us,” Pla, a 24-year-old demonstrator, told thousands of protesters at Bangkok’s Victory Monument on Sunday. “It’s no use. We are all leaders today.”

The absence of a centralised leadership was a defining feature of the seven straight months of protests that rocked Hong Kong – and what many say sustained the movement for so long.

While there were figureheads, decision-making was devolved with protesters commonly using online forums and the secure messaging app Telegram to organise – and gather in large numbers quickly.

In Thailand the use of Telegram has skyrocketed in recent days. Protesters have used it to co-ordinate rallies since the government ban on political gatherings of more than four people was implemented last week.

A group started by Free Youth, a key protest collective, reached the maximum 200,000 subscribers soon after it launched. Thai authorities have responded by ordering internet providers to block the app.

While many Thais are joining Telegram as non-protesting observers, active members use the groups to strategise – from where protests should take place to updates on police whereabouts.

Like the Hong Kong protesters, Thai activists have been putting decisions to a vote. On Monday the main Free Youth Facebook page asked supporters if they should take a break by hitting the “care” emoticon to pick a rest and the “wow” emoticon to protest. They decided to keep going.

Thai protesters are now trying to “remain as flat as possible, making leadership open and replaceable”, says Aim Sinpeng, a political scientist at the University of Sydney. “This is very different from past protests in Thailand that tended to be personalised around leaders who are often influential people.”

The use of the hashtag #everybodyisaleader has been growing on social media in recent days, an attempt to “re-pivot the movement… to protect itself from state persecution”, says Dr Aim, whose research focuses on digital politics in South East Asia.