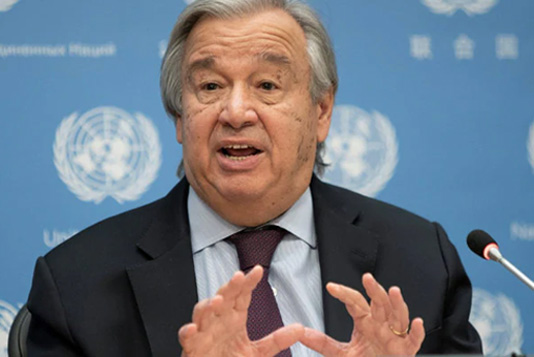 UN Secretary-General Antonio Guterres criticized developed countries for creating a “stockpile” of Covid-19 vaccines, and called on them to share with the rest of the world to help end the pandemic.
“I’m very concerned with this very unfair distribution of vaccines in the world,” Guterres said in an interview broadcast Sunday by the Canadian channel CBC, reports AFP.
“It’s in the interest of everybody to make sure that as soon as possible and in a fair way, everybody gets vaccinated everywhere and that vaccines are considered to be a truly global public good,” he said.
The UN chief criticized the “self interest” of rich countries for building up vaccine supplies beyond the needs of their populations.
“First, don’t stockpile vaccines,” he said, adding that it “doesn’t make sense.”
“We have been appealing to developed countries to share some of the vaccines that they have bought and in many situations they have bought more than what they need.”
The secretary-general lamented that the Covax international system of vaccine aid to disadvantaged countries is having “difficulties” because “there’s been a lot of hoarding.”
He said that ending the pandemic “depends a lot on having the possibility to vaccinate as quickly as possible the population all over the world,” and he pleaded in favor of a mechanism powered by the G20 to put in place a global vaccination plan.
Asked about the possible adoption of vaccination passports, Guterres was cautious, saying that before any decision is taken, there must be serious discussion to ensure fairness and to make sure that there is effective global cooperation.
“The worst is for some countries to have it and for other countries not have it… it will be devastating if this would mean that people could move within the developed world but not within the developing world,” he warned.
128
Share

Covid: Outdoor meetings and sport to resume in England