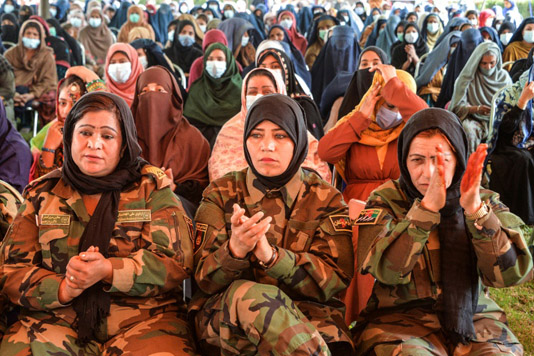 UN calls for women to have ‘meaningful’ role in peace process

The UN Security Council called Friday for the “full, equal and meaningful participation ofwomen” in Afghanistan’s peace process, without mentioning recent US effortsto end the conflict there.

“The members of the Security Council recognized that a sustainable peace can be achieved only through a comprehensive and inclusive Afghan-led, Afghan-owned peace process that aims at a permanent and comprehensive ceasefire,” the council said in a statement, reports AFP.

The council “condemned in the strongest terms the alarming number of attacks deliberately targeting civilians in Afghanistan.”

Without naming any particular group, the council said its members “also expressed their deep concerns about the threat posed by terrorism to Afghanistan and the region.”

“The members of the Security Council strongly encouraged parties to the negotiations to pursue confidence-building measures, including reductions in violence, and to continue to engage in good faith,” it said.

Washington recently submitted a draft peace agreement to the authorities in Kabul and to the Taliban, including the creation of a “new inclusive government,” according to a letter from US Secretary of State Antony Blinken that was revealed by Afghan media.

In that plan, the United States proposed holding an inter-Afghan meeting in Turkey and organizing, under the aegis of the United Nations, an international ministerial gathering that would bring together the United States, Russia, China, India, Pakistan and Iran to forge “a unitary approach”on the future of Afghanistan.