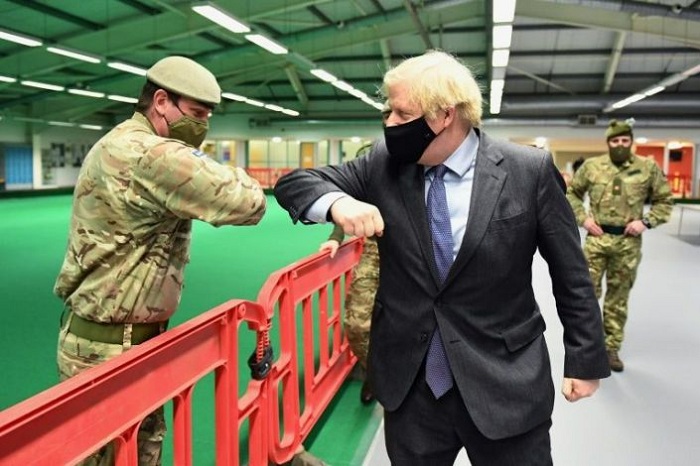 Prime Minister Boris Johnson on Thursday rejected calls for a second referendum on independence in Scotland, building his case for a continued United Kingdom on the joint effort to combat the coronavirus outbreak.
Johnson praised the UK’s collective response to the health crisis as he toured a vaccine plant in Livingston, west of Edinburgh.

“I think what people want to see is us bouncing back more strongly together,” he told reporters, calling the clamour for a new vote “completely irrelevant” given concerns about the pandemic.

“I don’t see the advantage of getting lost in pointless constitutional wrangling when, after all, we had a referendum not so very long ago,” he added, referring to a 2014 vote when Scotland opted to remain in the United Kingdom.

Johnson also travelled to a laboratory processing Covid-19 tests and a vaccination centre being set up by the British Army in the western city of Glasgow.

Soldiers were a clear example of the national effort, he said.

“I think you can see the amazing contribution of Scotland, Scottish scientists, Scottish people to the national effort and I don’t want to break that up,” he said.

Twenty consecutive polls have suggested majority support for independence, and the SNP has published an 11-point “roadmap to a referendum,” as well as a newly-formed “independence taskforce.”

But Johnson brushed aside criticism from Sturgeon, who earlier questioned if his trip breached coronavirus lockdown rules.

Sturgeon on Wednesday said she was “not ecstatic” about the visit, adding that leaders should stick to the same rules as the public about making only essential journeys.

“People like me and Boris Johnson have to be in work for reasons people understand, but we don’t have to travel across the UK. We have a duty to lead by example,” she said.

Johnson’s Downing Street office hit back, insisting it was “a fundamental role of the PM to be the physical representative of the UK government.”

It was “right that he’s visible and accessible for communities and businesses and the public,” a spokesman said.

Senior minister Michael Gove, a Scot who chairs a weekly sub-cabinet meeting on preserving the UK, added that the visit would provide valuable insight with regard to the government’s pandemic response.

“It’s also important the prime minister hears from those on the frontline what is going well and what needs to improve,” he told Sky News.

Dhaka-Delhi to strengthen ties thru’ mega events in 2021